Kippure (Irish: Cipiúr) at 757 metres (2,484 ft), is the 56th-highest peak in Ireland on the Arderin scale, and the 72nd-highest peak on the Vandeleur-Lynam scale. Kippure is situated in the far northern sector of the Wicklow Mountains, where it lies on the border of the counties of Dublin and Wicklow in Ireland. Kippure is the County Top for Dublin, and its height and positioning over Dublin city have made its summit an important site for transmission masts, which are highly visible from a distance. Kippure's slopes feed into the Liffey Head Bog which forms the source of the River Liffey. The summit can be easily accessed from the east via a path that lies off the R115 (also called the "Military Road") road along the route to the Sally Gap.

According to Irish academic Paul Tempan, "Kippure" is simply a "transliteration of a pronunciation collected locally, but without any clear meaning". Tempan notes that it resembles the Irish language term "ciop" (meaning stump) and "iúr" (meaning yew), however "stump of the yew" would be "Ciop Iúir". While it is unlikely that yew trees could have ever grown on an exposed mountain such as Kippure, Tempan notes that there is a connection with a similar name in the lower valley, where the association with yew trees could have come.

To the south of Kippure is the high mountain pass of the Sally Gap at 503 metres (1,650 ft), and the long winding "central spine" of the Wicklow mountains as the range runs to Mullaghcleevaun 849 metres (2,785 ft), and then on to Tonelagee 817 metres (2,680 ft), and finally to the terminus at Lugnaquilla 925 metres (3,035 ft) in the south, Wicklow and Leinster's highest mountain.

Kippure's prominence of 262 metres (860 ft) qualifies it as a Marilyn, and it also ranks it as the 32nd-highest mountain in Ireland on the MountainViews Online Database, 100 Highest Irish Mountains, where the minimum prominence threshold is 100 metres (328'). 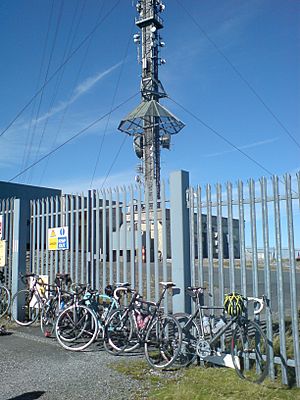 Transmitter mast on the summit

At the summit of Kippure stands a 127m (417') television and radio transmitter mast. This is the oldest television transmission site in the Republic of Ireland and was initially selected as a potential VHF FM radio transmitter site during the course of a Radio Éireann survey in the mid-1950s. The Irish Board of Works built an access road to the site in 1959, and the transmitter installation work was then started by the British company Pye Ltd. By the summer of 1961 the mast was erected and test transmissions followed, consisting of slide views of Ireland, a test-card, and the music of Count John McCormack.

Telefís Éireann began with transmission from Kippure on 31 December 1961 using the British 405-line TV standard on VHF Band III channel 7, to be followed by a 625-line service on channel H in the summer of 1962. Kippure was the first of the original five main Telefís Éireann transmitters to come into service, the others being, Truskmore (1962), Mount Leinster (1963), Maghera (1963), and Mullaghanish (1963). 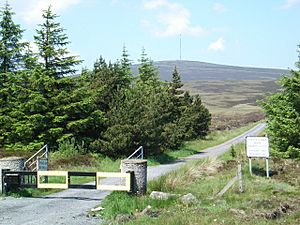 405-line transmission from Kippure ceased in 1978 with the arrival of RTÉ 2, however, Kippure did not transmit RTÉ 2 until much later. Initially on Channel J at low power later moving to Channel H with RTÉ 1 moving to Channel E.

Kippure's importance in radio and television transmission has diminished since the late 1970s with the opening of three new UHF transmitter sites at Three Rock in County Dún Laoghaire–Rathdown, Clermont Carn in County Louth, and Cairn Hill in County Longford, which provide better reception in most areas previously served only by Kippure. Today the Irish DTT service, Saorview, the national FM radio stations, and some commercial radio stations are broadcast from the site.

All content from Kiddle encyclopedia articles (including the article images and facts) can be freely used under Attribution-ShareAlike license, unless stated otherwise. Cite this article:
Kippure Facts for Kids. Kiddle Encyclopedia.