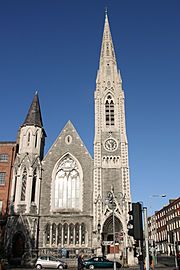 The harbour at Howth

The Northside (Irish: Taobh Ó Thuaidh) is the part of Dublin city that lies to the north of the River Liffey.

The Northside, though not an official or administrative area, is an important cultural reference and well-known colloquial geographical expression. The Northside contains some of the most scenic and well-regarded areas of the city in both cultural and social terms and major areas such as Howth, Sutton, Clontarf, Glasnevin, Drumcondra, Malahide, Coolock, Raheny, Finglas, Ballymun, Kilbarrack, Santry, Phibsborough and Castleknock are located on the Northside of the city. The definition of what constitutes the Northside can vary. Generally, it is considered to stretch as far north as Swords. Though Malahide, a close neighbour of Swords, is more often described as being in North County Dublin, despite being marginally closer to the city proper.

James Joyce set several of the Dubliners stories on the Northside, reflecting his childhood sojourns in Drumcondra and Fairview. Other best selling authors who have written extensively about the Northside include Dermot Bolger and Booker-Prize-winning author Roddy Doyle, who set several novels in the fictional Northside area of Barrytown.

The soap opera Fair City is set in Carrigstown, a fictional suburb of Northside Dublin. According to the RTÉ Guide, Carrigstown is bounded by Drumcondra to the north, the city centre to the south, East Wall to the east and Phibsboro to the west.

Areas of the Northside

The Northside includes Dublin city centre north of the Liffey, of whose many streets some are noted below, and districts such as Smithfield and Summerhill. Some older districts, such as Oxmantown, no longer exist. Beyond the centre, areas of the Northside include the below, most (at least two names were invented in the 1960s) of the names being of long heritage, though until recently many were rural townlands. Some are distinct suburbs or villages, others are parts of larger areas:

The 'area' is administered both by Dublin City Council (formerly Dublin Corporation) and Fingal County Council, responsible for 84% and 16% of the land area which lies inside the M50 motorway and north of the river Liffey respectively (excluding the Howth peninsula).

The Fingal/Dublin city boundary, when drawn up in 1985, was viewed as the edge of all Northside development from Dublin City at that time. Of course this boundary has moved significantly with the housing boom of the 1990s, with large tracts of formerly rural land being swallowed up by the city in areas such as Ashtown, Balgriffin, northern Coolock, Donaghmede and Baldoyle, and beyond Finglas.

In general, Dublin postal districts on the Northside are odd numbers, while Southside codes are even. One exception is the Phoenix Park, which is on the Northside but forms part of an even-numbered district (Dublin 8). The reason behind this is explained by eminent Dublin historian Pat Liddy: "Long before there were postal codes the James's St Postal Sorting Office looked after the Phoenix Park because it was considered to be closer and more convenient than Phibsborough (Dublin 7). James's St continued in this role when the postal codes were introduced so Dublin 8 it had to be." 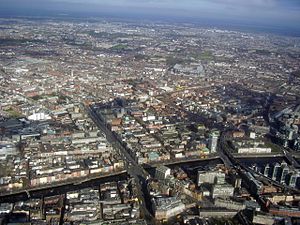 Aerial view of Dublin's Northside, with O'Connell Street in the left-foreground, Croke Park in the centre-middleground and Clontarf and Portmarnock in the background

Well known places and sights on the Northside include:

The main shopping area in the north inner city, and busiest shopping street in Ireland, is Henry Street/Mary Street, just off O'Connell street. Four of the six city centre shopping centres are located on the Northside, these are the Jervis Centre, the Ilac Shopping Centre, Irish Life Shopping Mall and the Moore Street Mall, along with the largest out-of-town centre, at Blanchardstown, and others at Swords, Coolock, Charlestown and Donaghmede.

The Cineworld (UGC) cinema on Parnell Street is the largest cinema in Ireland with seventeen screens, the other notable north inner city cinema, the Savoy, is located on O'Connell Street and is one of Ireland's oldest cinemas.

All content from Kiddle encyclopedia articles (including the article images and facts) can be freely used under Attribution-ShareAlike license, unless stated otherwise. Cite this article:
Northside, Dublin Facts for Kids. Kiddle Encyclopedia.