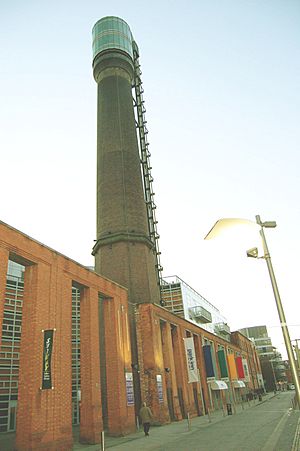 Chimney with observation decks in Smithfield

Notable landmarks include the Old Jameson Whiskey Distillery and the Observation Tower.

Historically, Smithfield was a suburb of Oxmantown and lay within the civil parish of St. Paul's. There is no general agreement on the extent of the area known as Smithfield, but it roughly incorporates the area bounded by the River Liffey to the south, Bow Street to the east, Queen Street to the west, and North Brunswick street in the suburb of Grangegorman to the north.

Smithfield Market was laid out in the mid 17th century as a marketplace. Until its renovation in the early 21st Century, the square was lined with inner city 'farm yards' housing livestock. In 1964 Richard Burton and Elizabeth Taylor spent time here, as Burton worked on the film set in Smithfield for the film adaptation of John le Carré's novel The Spy Who Came in from the Cold. Smithfield featured as Checkpoint Charlie in the movie.

Smithfield was rejuvenated under the HARP (Historic Area Rejuvenation Plan). An architectural competition was held and won by McGarry NiEanaigh Architects in 1997. The restoration involved lifting more than 400,000 one hundred and twenty-year-old cobblestones, cleaning them by hand and re-laying them.

Contemporary architecture and twelve 26.5 metre gas lighting masts, each with a 2-metre flame, now flank the square. Although the flames are rarely lit, the lighting mast shades can at times be seen in different colours, reflecting cultural events throughout the year. For example, they change to a vivid green shade as part of St Patrick's Day celebrations, and were changed to rainbow colours for the opening night of the 2015 GAZE International LGBT Film Festival at Smithfield's Light House Cinema.

Smithfield has held many horse fields since the 80’s and the tradition still continues today. Horse fairs take place every first Sunday of each month. The smell of horses can still be experienced at Smithfield at the Horse Market. And the sight and sounds on these Sundays give an impression of what Smithfield was once like, with a number of surrounding alleys and lane ways bearing obscure names relating to the equine heritage of the site. 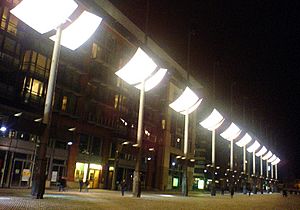 The square was used to hold several concerts after its renovation but these were discontinued following complaints from local residents. Although the site has not developed as a 'Western IFSC' as had been originally anticipated (in reference to the city's main financial hub to the east and its related significant 'white-collar professional' residential zones), the plaza is providing a convenient through route for local residents as well as for a number of professionals and users of a range of court and legal-related services and buildings in the area. These range from the Prison Probation Services through to the Family Court and the Law Society of Ireland, amongst others, with Smithfield and Smithfield Market situated in convenient proximity to Dublin's legal/prosecution hub of The Four Courts. 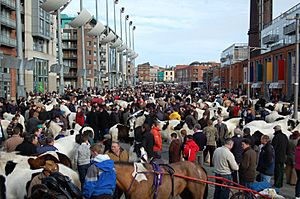 The area is known for the historical Horse market which is held on the first Sunday of March and September.

The Horse Fair used to take place every month. A Bye-law passed on 14 January 2013 reduced it to twice a year and this also established some new rules and regulations. The main causes for the change were some violent incidents and objections of nearby residents who are uncomfortable with its atmosphere, noise, perceptions of animal abuse and neglect. The Smithfield Horse Fair continues to draw heavy and sustained criticism from a wide range of sources, including An Garda Síochána, and the Dublin Society for Prevention of Cruelty to Animals (DSPCA),.

Every year, Smithfield usually opened an Ice-Skating rink during Christmas time. The last time it was opened was in 2013. It was quite successful as it attracted all sorts of people and tourists. Smithfield On Ice is all wrapped up in a winter wonderland as Ireland’s original ice rink captures the magic of Christmas with a magnificent themed Christmas village. The famous cobblestones of Smithfield square were transformed into a world-class professional ice rink over the Christmas period but it takes on a magical feel as the whole square sparkles with festive fun. Apart from the obvious ice skating rink, a big highlight at Smithfield On Ice was Santa’s Workshop where children could clock in to help Santa’s elves, paint their own unique Ginger Bread Man all the way from the North Pole and then meet Santa himself for gifts and photos. 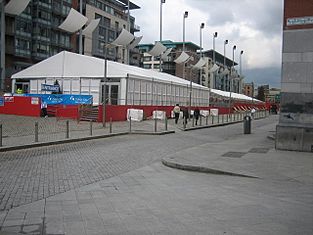 After going ice skating you could relax in the rink side cafe (or instead of skating if indeed that not for you) and sip a hot chocolate. The rink side cafe served snacks and food all day. It is unknown why it was discontinued.

The old Jameson Distillery Chimney tower, and its observation deck, is no longer accessible to the public as it has long-since been closed due to health and safety concerns.

The Light House Cinema was resurrected in May 2008 in the Smithfield Square, after it had been forced to close its doors on Abbey Street on 27 September 1996.

The Smithfield Market was laid out in the mid 17th century as a marketplace. It was then renovated in the early 21st century. Since then it has held numerous concerts but these were discontinued following complaints from local residents.

Smithfield is home to the Metropolitan Children's Court, where defendants under the age of 18 are usually dealt with.

Smithfield may include the satellite, and developing "Museum district" to the west, and the Four Courts district to the east. These districts are largely residential and combined with the area around Smithfield square they comprise the main Liffey river frontage of Dublin 7.

Recent commercial, residential and cultural developments led to the area becoming newly fashionable in the first decade of the 21st century. However, most notably in the period 2008 to 2010, stagnation set in as developments stalled and the Irish economy/property market nose-dived once the post-Celtic Tiger economic recession struck. The significant issues of variable apartment occupancy rates, coupled with closed retail spaces and a near-absolute majority of unfinished and unoccupied commercial units at Smithfield Market have created a highly visible reminder of the economic and community challenges still to be addressed in this historic part of Dublin.

The Red Luas Line skirts the square to the south, providing a convenient link to the nearby city centre, or to the far south of the city, to Tallaght or Saggart.

All content from Kiddle encyclopedia articles (including the article images and facts) can be freely used under Attribution-ShareAlike license, unless stated otherwise. Cite this article:
Smithfield, Dublin Facts for Kids. Kiddle Encyclopedia.