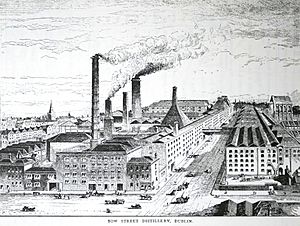 At this time, it was described by many as a "city within a city". The distillery also housed a Smithy, Cooperage, saw mills, engineers, carpenters, painters and coppersmiths’ shops. Water for the distillery came from two deep wells dug underneath the site. Cellars were also dug underneath nearby streets to store maturing whiskey, while four stills and two wash stills, each holding 24,000 gallons (109,000 L), were heated by both fire and steam coils above.

Following a difficult period that included American Prohibition, Ireland’s trade war with Great Britain, and the introduction of Scotch blended whiskey, the Jameson distillery fell on hard times and decided to form the Irish Distillers Group with their previous rivals, the Cork Distilleries Company and John Power & Son in 1966. Eventually, it became one of the last distilleries in Ireland to close in 1971. The operation was then moved out of Dublin to the New Midleton Distillery.

All content from Kiddle encyclopedia articles (including the article images and facts) can be freely used under Attribution-ShareAlike license, unless stated otherwise. Cite this article:
Jameson Distillery Bow St. Facts for Kids. Kiddle Encyclopedia.