Blanchardstown (Irish: Baile Bhlainséir) is a large suburb of Dublin in Fingal, Ireland, located 10 km north-west of the city centre. It is within the historical barony of Castleknock, the Dublin 15 postal area and the Dublin West electoral constituency. It is largest urban area in the county. The 2011 Census recorded a population of 68,156 in Blanchardstown and its immediate environs. In 2016, the population increased to 120,000, It is within Ireland's fastest growing local authority area of Fingal and is now bigger than Galway and Limerick Cities. Blanchardstown is also a parish in the Blanchardstown deanery of the Roman Catholic Archdiocese of Dublin. Ireland's largest shopping and leisure centre, the Blanchardstown Centre, is located in the parish.

Blanchardstown has grown up alongside its smaller neighbouring town, Castleknock. Both towns shared a common history until well into the 19th century, when their development diverged. The name Blanchardstown comes from the Blanchard family, who were granted their estate some time between 1250 and 1260. The name 'Blanchard' is thought to come from the old French word blanch, meaning white, and could refer to white or fair hair. The townland has an area of over 454 acres.

Blanchardstown was a rural village in western County Dublin until the late 1960s, when the first housing estates began to be developed. Blanchardstown developed in tandem with neighbouring settlement Castleknock, both of which grew rapidly from the early 1970s to the present. During the 1970s/80s, the village became subsumed into the suburban fabric of Dublin. The Institute of Technology, Blanchardstown (ITB) was established in 1999.

A criminal gang from Blanchardstown became notorious as "The Westies". They controlled the heroine trade in west Dublin. One of its leaders, Bernard Sugg, was shot in a pub in Blanchardstown in 2003, while the others were killed in Spain in 2004.

In the 19th century, the Roman Catholic parish of Blanchardstown encompassed much of the area now within the Dublin 15 postal district. Following the relaxation of the Penal Laws, it became possible for the Catholic adherents to consider the construction of additional churches and to repair the existing stock of religious buildings. Church authorities used the opportunity to implement the Tridentine reform which saw the parish as the basic unit of ecclesiastical organisation and the parish priest as the central figure within the parish.

The new parish priest of Blanchardstown in 1839, Fr Michael Dungan, oversaw the construction of a number of new churches, which are today independent parishes in their own right, and invited a number of religious communities to provide for the education of Catholic children. St Brigid's Church, Blanchardstown – not to be confused with a church of the Church of Ireland in nearby Castleknock – was constructed in 1837 upon the foundation of a church that had been built prior to 1731. It is the Mother church of 12 other churches constituted out of the parish over the following 156 years. They are: 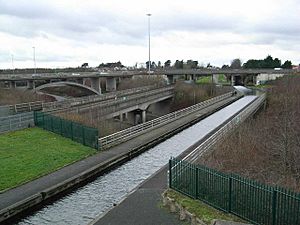 Blanchardstown is just outside Dublin's M50 motorway ring road, slightly to the north of the tolled crossing of the River Liffey. The core of the suburb is the townland of the same name. It is bordered to the east by the suburb of Castleknock, to the west by Clonsilla/Ongar, to the north by Tyrellstown/Hollystown and to the south and south east by Porterstown/Diswellstown. The Royal Canal and the Dublin-Sligo railway line pass along the southern edge of Blanchardstown proper from east to west.

For the purposes of elections to Dáil Éireann, it is part of the Dublin West constituency which returns four TDs. 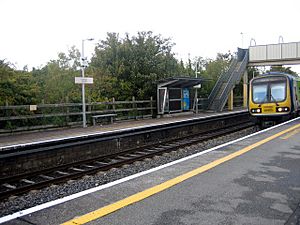 Bus Éireann services pass through Blanchardstown on Routes 105,109 and 111. 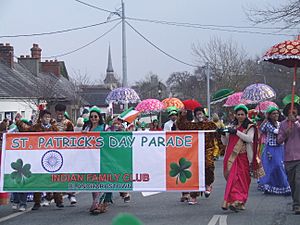 All content from Kiddle encyclopedia articles (including the article images and facts) can be freely used under Attribution-ShareAlike license, unless stated otherwise. Cite this article:
Blanchardstown Facts for Kids. Kiddle Encyclopedia.