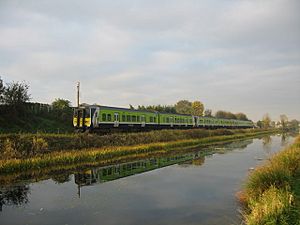 Ongar is served by Hansfield railway station, a 10-15 minute walk away. Since 2017 a connection to the Luas Green Line is possible via Broombridge station. 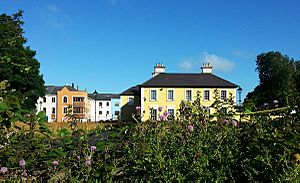 Ongar is an outer western suburb of Dublin, Ireland. Developed on a greenfield basis since 2001, it comprises the townlands of Castaheany (northerly) and "Hansfield or Phibblestown" (southerly), within the ancient Barony of Castleknock, County Dublin. It is close to Castleknock, Blanchardstown and Clonsilla. The development has a number of amenities on the main street, there are several schools in the area, and the nearby railway line at Hansfield railway station connects to the Luas Green Line and ultimately the N3 national route / M3 motorway. Employers in the nearby business parks and "Greater Blanchardstown" include Intel, Hewlett Packard, IBM, Kepak and eBay.

Ongar is in the Dublin 15 postal district. It is contained within the old civil parish of Clonsilla. The suburb lies on the border of County Meath; the village of Clonee is 2 kilometres to the north. Also to the north is the Littlepace interchange of the N3 national route. To the south lies the Royal Canal with Clonsilla located to the east. It is three kilometres from Blanchardstown Shopping Centre. It is centred on the townland of "Hansfield or Phibblestown". The facade of Hansfield house has been preserved. Pedestrian access is possible to the townland of Castaheany to the north where the tree-lined avenue, house and walled garden of Phibblestown house have been preserved. In this townland, a primary and secondary school are located.

Once the residence of Hollywood starlet Rita Hayworth and her husband Prince Aly Khan. Building of the suburb started in 2001 on the site of a former stud farm owned by the prince and continued as recently as 2009.

The area includes a mix of apartments and larger houses. As a greenfield development, Ongar's master plan provided for a main street, where most commercial development would be concentrated, with the intention that it would emulate a traditional Irish village. Main Street has a public house, supermarket, grocery shops, an off licence, a bakery, a turf accountant, a medical centre, hairdressers, a florist, and a number of eating places.

The residential neighbourhoods within Ongar are called Ongar Chase, Ongar Green and Ongar Park. Delhurst, Hayworth, Stralem, Annaly, Willans, Blackwood and Lilys Way are all districts within these neighbourhoods. The recently developed neighbourhood of Barnwell Hansfield could also be considered part of the Ongar catchment.

While the Allenwood estate is within the townland of Hansfield, it is closer to the centre of Hartstown. 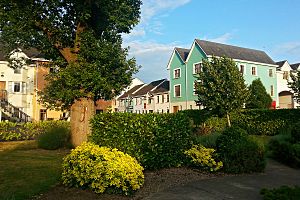 The areas is served by two Gaelic Athletic Association clubs, Erin go Bragh GAA, which moved to nearby Littlepace in 2003, and Westmanstown Gaels at the Garda Síochána sports grounds in Westmanstown, near Clonsilla. For soccer, Clonee United, also based in Littlepace, was formed in 2003 through the amalgamation of two clubs, Casta Celtic, formed in 2002, and Little Pacers F.C., established in 2000, while Santos Soccer Club plays beside the Phibblestown Community Centre. Erin Go Bragh and Clonee United run under-age "nurseries". The Ongar Chasers basketball club is in Phibblestown Community Centre. Ongar Karate Club is in the Ongar Community Centre, beside Scoil Benedict.

All content from Kiddle encyclopedia articles (including the article images and facts) can be freely used under Attribution-ShareAlike license, unless stated otherwise. Cite this article:
Ongar, Dublin Facts for Kids. Kiddle Encyclopedia.