Drumcondra (Irish: Droim Conrach, meaning Conra's Ridge) is a residential area and inner suburb on the Northside of Dublin, Ireland. It is administered by Dublin City Council. The River Tolka and the Royal Canal flow through the area. Drumcondra is also a parish in the Fingal South West deanery of the Roman Catholic Archdiocese of Dublin.

The village of Drumcondra was the central area of the Parish of Clonturk, and the two names were used equally for the religious and civil parishes, but the new suburban district of Drumcondra now also encompasses the old Parish of St.Mary.

The Cat and Cage Pub on the Drumcondra Road was the site of an old postal stop and the point at which rebels, during the 1798 rebellion, seized a postal cart in order to signal to others in north County Dublin to revolt. The Cat and Cage is located at the corner of Church Avenue. 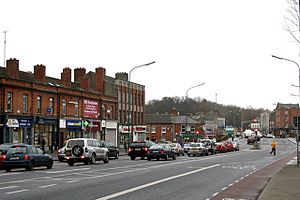 One of the main sights of Dublin is Croke Park, where Ireland's national games of Gaelic football and hurling may be seen. Boasting a capacity for 82,300 people, it is one of the largest sports stadiums in Europe. 'Croker' (as it colloquially known) is the headquarters of the Gaelic Athletic Association and also houses the official GAA Museum (on St Josephs Avenue, which is off Clonliffe Road). The stadium has the right to host the final matches of the All-Ireland Senior Football Championship and All-Ireland Senior Hurling Championship. The stadium is a 20-minute walk from Dublin city centre, or a 5-minute bus ride.

Kennedys Pub on Lower Drumcondra Rd is one of the oldest pubs in Drumcondra, predating Fagans by a number of years. Formerly called McPhilips, its been named Kennedys since 1961. 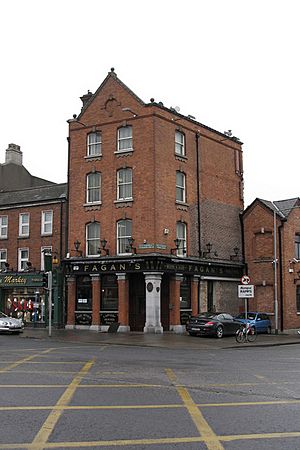 Tolka Park the home of League of Ireland side Shelbourne is situated on Richmond Road.

The National Council for the Blind at Whitworth Road, is located near the Church of St. George cemetery.

The oldest church in the district is Drumcondra Church (Church of Ireland), located at the bend of Church Avenue, abutting All Hallows College. Several notable people including Georgian-period architect James Gandon are buried in the adjoining graveyard.

The "Old Church of St.George" was built about 1668 in Lower Temple Street (changed to Hill Street in the 1800s), then a part of Drumcondra. The Tower of the Old Church of St. George can still be seen in Hill Street and its gravestones are around the walls of what is now a playground.

The "New Church of St.George" was built on the square further up the road at the end of Temple Street in the early 1800s. The original site acquired for the new church was on Whitworth Road, but then the present site was selected, which at the time was open fields. A temporary chapel was built on the Whitworth Road site and its churchyard was retained when St. George's was completed - this site was later taken over by the Whitworth Hospital (later named Drumcondra Hospital). The gravestones can be seen behind the Hospital.

In the Catholic church, Drumcondra is served by the Church of Corpus Christi at Home Farm Road. The palace of the Roman Catholic Archbishop of Dublin is situated alongside Clonliffe College (the diocesan seminary). Together they occupy an extensive site bounded by Clonliffe Road and the Drumcondra Road (to the South and West) with the River Tolka at the northern extremity.

The Respond! Housing Association has its Dublin office located in High Park, Drumcondra, where it also runs training courses in Housing and Social care provision.

All content from Kiddle encyclopedia articles (including the article images and facts) can be freely used under Attribution-ShareAlike license, unless stated otherwise. Cite this article:
Drumcondra, Dublin Facts for Kids. Kiddle Encyclopedia.