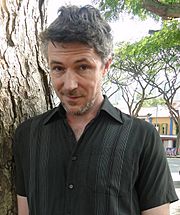 Aidan Gillen (born Aidan Murphy; 24 April 1968) is an Irish movie, stage, television, and voice actor who is known for his roles in Shanghai Knights, Blitz, 12 Rounds, and The Dark Knight Rises. His most famous role is probably Petyr Baelish in Game of Thrones.

Gillen was born on 24 April 1968 in Dublin, Ireland. He studied at St. Vincent's C.B.S. Gillen has been married to Olivia O'Flanagan since 2001. They have two children.

All content from Kiddle encyclopedia articles (including the article images and facts) can be freely used under Attribution-ShareAlike license, unless stated otherwise. Cite this article:
Aidan Gillen Facts for Kids. Kiddle Encyclopedia.