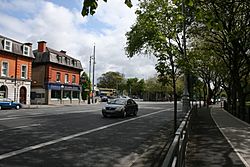 Fairview (Irish: Fionnradharc) is a coastal suburb of Dublin in Ireland, in the jurisdiction of Dublin City Council. Part of the area forms Fairview Park on land reclaimed from the sea.

Fairview is reached on a main road artery from Dublin city via North Strand, which continues on as the Malahide, Howth and Clontarf Roads. It is served by the Clontarf Road DART station. The area can also be reached by way of several Dublin Bus routes from the city centre, including 14, 15, 27/ABNX, 29A/N, 31/B, 32/ABX, 42/N, 43, 123, and 130.

Neighbouring districts include Marino to the north, North Strand and Ballybough to the west, East Wall to the southwest, and Clontarf to the east.

Fairview is a parish in the Fingal South East deanery of the Roman Catholic Archdiocese of Dublin. It is served by the Church of Visitation of the Blessed Virgin Mary.

The Irish name seen on street signs opposite Fairview Park, as well as on Fairview Avenue and Fairview Terrace, is Baile Bocht, rather than the current Fionnradharc, which suggests that this area was originally part of Ballybough, the neighbouring community on the far side of the river Tolka.

Fairview began to grow after the building of Annesley Bridge in 1797 opened up easy access to the land; since 1488 there had been no crossing of the River Tolka below Ballybough Bridge.

Administratively, Fairview and Marino were part of the old townland of Clonturk, which also included Drumcondra.

Fairview Strand was formally known as Owen Roe Terrace and Philibsburgh Strand. Philipsburgh Avenue was called Ellis's Lane and a small area around there was known as Annadale, home to one of Dublin's earliest Jewish communities. Annadale House was located in an estate that now comprises Melrose Avenue, Lomond Avenue, Waverly Avenue, and Inverness Road. On Fairview Strand, near Luke Kelly bridge, is Dublin's oldest Jewish Cemetery, Ballybough Cemetery. The graveyard was built in 1718, with a mortuary chapel added in 1857 (the Hebrew date 5618 is inscribed on the front), and contains more than 200 graves. The last burial there was in 1958.

The main commercial areas are Fairview, a busy road alongside Fairview Park, and Fairview Strand, a narrower commercial and residential strip running from Edge's Corner around to Luke Kelly Bridge.

St. Vincent's Hospital was founded by the Daughters of Charity in 1857. Located on the Richmond Road, it provides psychiatric services for the northeast quadrant of Dublin city.

Ireland's largest sporting stadium and home to the Gaelic Athletic Association - the GAA - Croke Park is located near Fairview. Fairview and Marino both contain restaurants, cafes and pubs, which draw trade from events at Croke Park.

One of the area's main features, Fairview Park, built on reclaimed land, was reduced in size during the 2000s, due to the development of the Dublin Port Tunnel, whose entrance is just beyond the old park perimeter. The park has now been restored. Along with the two smaller playgrounds which remain, a large children's playground has been constructed, a band stand, skate park, new paths in parts and greenery continue to be improved on.

A smaller park, Bram Stoker Park, is named after the author of Dracula, and is in front Marino Crescent of a terrace of Georgian houses. Stoker was born in one of them, 15 Marino Crescent.

There is an active residents association, Fairview Residents Association.

All content from Kiddle encyclopedia articles (including the article images and facts) can be freely used under Attribution-ShareAlike license, unless stated otherwise. Cite this article:
Fairview, Dublin Facts for Kids. Kiddle Encyclopedia.