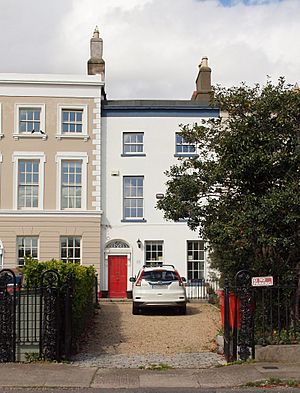 The crescent was built by Charles Ffolliott in 1792 as a spite wall to block the view of Dublin Bay from the Casino at Marino, which was much coveted by the Earl of Charlemont, James Caulfield of Marino House. The terrace was built with red brick front finishes in a similar method to Mountjoy Square and Merrion Square however, owing to the fashion of the time the fronts were plastered over during the Regency period and all of the facades remain in the same state as of 2020.

All of the houses are three-storey over basement properties and all are two bay with the exception of the two largest central houses, numbers 13 and 14, which are three bay.

Number 26 Marino Crescent was demolished in the 1980s to make way for a faux Georgian block of apartments known as Crescent House. The remaining 25 houses on the terrace are listed on the Record of Protected Structures.

The originally private Marino Crescent Park garden square in front of the crescent is now a public park having been acquired by Dublin corporation in the 1980s. It was officially renamed Bram Stoker Park by Dublin City Council in the 2010s but retains its private feel due to a wall and trees surrounding most of the park with the original Georgian fencing surrounding the remainder facing the houses.

Closing times range from an earliest of 16.30 in December and January to a latest of 21.30 in June and July.

All content from Kiddle encyclopedia articles (including the article images and facts) can be freely used under Attribution-ShareAlike license, unless stated otherwise. Cite this article:
Marino Crescent Facts for Kids. Kiddle Encyclopedia.