The square was laid out in 1752 by the estate of Viscount FitzWilliam and was largely complete by the beginning of the 19th century. The demand for such Georgian townhouse residences south of the River Liffey had been fuelled by the decision of the then Earl of Kildare (later the Duke of Leinster) to build his Dublin home on the then undeveloped southside. He constructed the largest aristocratic residence in Dublin, Leinster House, second only to Dublin Castle. As a result of this construction, three new residential squares appeared on the Southside: Merrion Square (facing the garden front of Leinster House), St Stephen's Green, and the smallest and last to be built, Fitzwilliam Square.

Aristocrats, bishops and the wealthy sold their northside townhouses and migrated to the new southside developments. 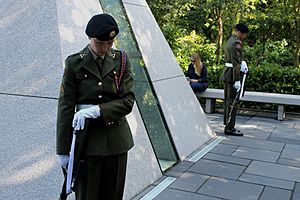 All the original 18th century properties in Merrion Square have survived to the present day. Three sides are lined with Georgian redbrick townhouses; the West side abuts the grounds of Leinster House (seat of the Oireachtas), Government Buildings, the Natural History Museum and the National Gallery. The central railed-off garden is now a public park.

The Wellington Testimonial to commemorate the victories of Arthur Wellesley, 1st Duke of Wellington, was originally planned to be located in Merrion Square. However it was built in the Phoenix Park after opposition from the square's residents. 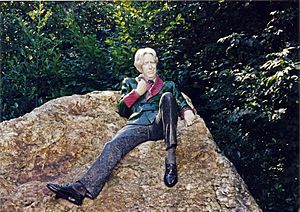 Until about the 1950s, the houses in the square were largely residential, but today most of them are used for office accommodation. The Irish Red Cross, the Royal Institute of the Architects of Ireland and the Irish Georgian Society have their headquarters on the square. The National Maternity Hospital is on the North terrace.

The poet, novelist, and satirist Oscar Wilde lived at No. 1, poet W. B. Yeats lived at No. 82, and Daniel O'Connell at No. 58, the latter of which is now known as the O'Connell House, home to the Keough Naughton Centre of the University of Notre Dame, an American college. The fashion and interior designer Sybil Connolly lived at No. 71. A number of houses in the square have plaques with historical information on former notable residents, including A.E. (George William Russell) and Sheridan Le Fanu. Despite the Square being largely occupied by commercial entities, there are still several residents, including fashion designer, Louise Kennedy, tycoon Dermot Desmond and US-based financier, Sean Reynolds.

Until 1972 the British Embassy was based at No 39. However, following the Bloody Sunday shootings in Northern Ireland, a crowd of over 20,000 people converged on the site in protest and the building was burnt to the ground. Currently, the Embassies of France and Slovakia are based on the south side of the square and the Church of Scientology's National Affairs Office has been housed at No 4 on the north side since October 2016. 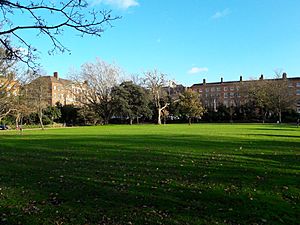 The earliest plan of the park shows a double line of trees around the perimeter which was later enclosed by railings in the early years of the 19th century. A Jardin Anglaise approach was adopted for the layout of the park with contoured grass areas, informal tree clumps, sunken curved paths and perimeter planting.

Up until the 1960s, the park was only open to residents in possession of a private key. Now managed by Dublin City Council, the park contains a statue of Oscar Wilde, who resided in No. 1, Merrion Square from 1855 to 1876, many other sculptures and a collection of old Dublin lamp standards. The Irish American sculptor Jerome Connor, best known for his work Nuns of the Battlefield in Washington DC, designed the public art piece, "Eire". The park also contains a sculpture of a Joker's Chair in memory of Father Ted star Dermot Morgan.

The park in the square was called "Archbishop Ryan Park", after Dermot Ryan, the Catholic archbishop who transferred ownership to the city. In 2009, Dermot Ryan was criticised in the Murphy Report; in January 2010, Dublin City Council sought public views on renaming the Park. In September 2010, the City Council voted to rename the park as Merrion Square Park.

The park was also used by the St John Ambulance Brigade for annual events such as review and first aid competitions. The organisation was founded in 1903 by Sir John Lumsden K.B.E., M.D. During this time Dr Lumsden was living nearby at 4 Fitzwilliam Place. He was the chief medical officer at the Guinness brewery and practised at Mercer's Hospital.

All content from Kiddle encyclopedia articles (including the article images and facts) can be freely used under Attribution-ShareAlike license, unless stated otherwise. Cite this article:
Merrion Square Facts for Kids. Kiddle Encyclopedia.