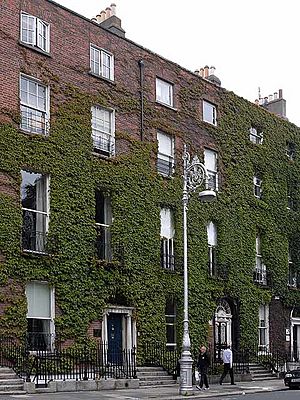 Fitzwilliam Square (Irish: Cearnóg Mhic Liam) is a Georgian garden square in the south of central Dublin, Ireland. It was the last of the five Georgian squares in Dublin to be built, and is the smallest.

The square was developed by Richard FitzWilliam, 7th Viscount FitzWilliam, hence the name. It was designed from 1789 and laid out in 1792. The center of the square was enclosed in 1813 through an Act of the Parliament of Ireland. To the north is the much larger Merrion Square, with which Richard FitzWilliam was also involved. The square was a popular place for the Irish Social Season of aristocrats entertaining in Dublin between January and Saint Patrick's Day each year.

Shootings took place in the square during Bloody Sunday of 1920. Sir Thomas O'Shaughnessy (1850–1933), the last Recorder of Dublin, lived in Fitzwilliam Square and died there on 7 March 1933.

The N11 road passes through the northwest side of the square on its way into central Dublin.

In March 2011, the entire space at 14 Fitzwilliam Square was let on a flexible seven-year lease to gold bullion brokers GoldCore.

All content from Kiddle encyclopedia articles (including the article images and facts) can be freely used under Attribution-ShareAlike license, unless stated otherwise. Cite this article:
Fitzwilliam Square Facts for Kids. Kiddle Encyclopedia.