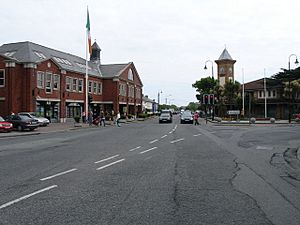 Sutton' (Irish: Cill Fhionntáin – Fintan's cell or church) is a residential suburb of Dublin's Northside, Ireland, at the base of Howth Head, the peninsula forming the northern edge of Dublin Bay. There is a small commercial core at the Sutton Cross road crossing. 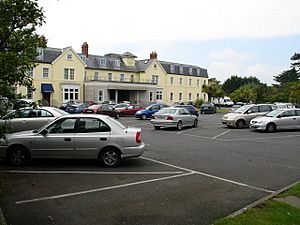 Beginning about 12 kilometres from the city centre, Sutton neighbours Howth, which occupies most of the Howth peninsula, and Baldoyle and Bayside. It is served by the main road from Dublin to Howth, the DART suburban rail system, on which it has its own station, and Dublin Bus route 31 and its variants. Historically Sutton lay entirely on the peninsula but it is now generally held to extend to the railway and perhaps as far as the junction of Baldoyle Road and the coast road, where is meets both Baldoyle and Bayside.

At the coastal side of Sutton is a tombolo connecting Howth (which used to be an island) to the mainland. The original village of Sutton was situated on the city-facing (south-western) side of Howth Head, where there are today housing terraces and a small harbour, but the area is now centered on Sutton Cross, where there are two shopping areas, one anchored by Supervalu (previously Superquinn, (which replaced the local cinema), and the Marine Hotel.

Sutton is part of the Dáil Éireann constituency of Dublin North-East and part of the Howth-Malahide local electoral area of Fingal County Council. 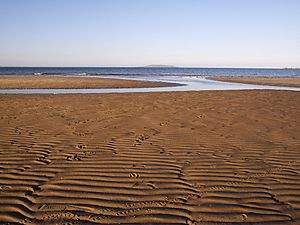 Sutton is surrounded by many beaches. The Burrow Beach is particularly popular among locals and tourists. It is approximately 1.2km and stretches from Baldoyle Library to Howth, connecting Howth Head to the mainland. There is dinghy sailing off the coast, and golf at Howth Golf Club. Suttonians Rugby Football Club, at Station Road, provides for local rugby players and supporters. Sutton Tennis Club has 12 outdoor courts and three indoor squash courts; it is the biggest for junior squash in the Republic of Ireland.

The area is also home to one of Ireland's Martello Towers, now a private residence, at Red Rock, and to a former home of the Jameson Irish Whiskey family, which became the residence of Belgian businessman Albert Luykx, made famous during the Irish arms trial. It subsequently became Sutton House Hotel and then Sutton Castle Hotel, before being converted in 2003 to private residences.

A major leisure walk, which goes all the way to Howth village, begins near the site of the old village and Sutton House.

There are small streams in the area, but they are largely culverted; two of these, the Santa Sabina Stream and the Carrickbrack Stream, come to the coast on Sutton Strand.

Sutton contains one of Dublin's main burial grounds, St. Fintan's, which is divided into two parts, "old" and "new." The former contains a ruined chapel, and the latter, an abandoned keeper's cottage.

Uphill from the older graveyard, in a wooden hut on private grounds, is the still-flowing holy well of St. Fintan.

All content from Kiddle encyclopedia articles (including the article images and facts) can be freely used under Attribution-ShareAlike license, unless stated otherwise. Cite this article:
Sutton, Dublin Facts for Kids. Kiddle Encyclopedia.