Sutton Castle or Sutton House is a Victorian Tudor-style castellated mansion house with terraced gardens on the southern coast of Howth Head, overloooking Dublin Bay, in the suburbs of Dublin, Ireland.

The house was designed for industrialist and politician Andrew Jameson, great-grandson of John Jameson, by Manchester-based architect Alfred Darbyshire, who had previously worked on some of the Jameson distilleries. Located in the townland of Sutton South, it was constructed around the year 1880 on lands spanning the Bailey area of Howth and neighbouring Sutton.

The 40-room house replaced an earlier nearby Sutton House which was demolished and had previously been occupied by Joseph Devonsher Jackson and later by Alice Lawrenson and Rev William Lawrenson, prebendary of Howth. Prior to the construction of the earlier Sutton House the land was owned by the Hackett Family and a substantial 16th century castle house stood on its grounds roughly near the location of the current castle gates.

The house was converted into a 19-bedroom hotel in the 1970s called Sutton House Hotel and later Sutton Castle Hotel. It was sold, along with 7 acres of gardens and woodland, for IR£2.55m in 1997. Having continued to operate as a hotel, and then having operated as a temporary centre for asylum seekers for a number of years, the hotel was converted into 17 luxury apartments by the McKeown Group in 2001.

The main house, situated on terraces, has four storeys, and overlooks Dublin Bay. It has a Gothic porch, terracotta tiling, and art deco style chimneys, and the original bay and window structure is retained. A modern one- and two-storey extension to the west was added around 1990. The lobby and some of the original reception rooms remain, the latter now incorporated into some of the modern apartments. The main stairway was retained and restored, and a lift added prior to sale as apartments. Eight apartments were formed in the main house, and nine in the western extension.

The house was damaged by fire in 1925 while newly wed Jameson and Ruth Hart were on honeymoon in New York but was later restored to its original condition.

A nearby Martello Tower, right on the coast, in the area known as Red Rock, and constructed in 1804, is also listed on the Record of Protected Structures for Fingal (RPS 0579). It was the first of around 29 Martello Towers to be constructed in the Greater Dublin area and was referred to as Tower Number 1. The tower previously formed part of the grounds of Sutton Castle, at various times being leased and owned by Andrew Jameson and accessed via the same gate at Sutton House, but has since been detached, and converted into holiday rental accommodation. 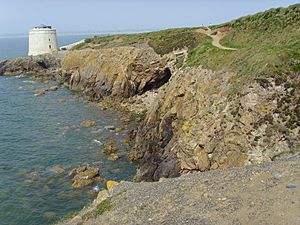 The Martello Tower at Red Rock in 2007 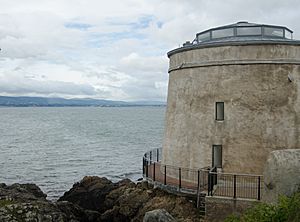 A view across Dublin bay from the tower in 2017

All content from Kiddle encyclopedia articles (including the article images and facts) can be freely used under Attribution-ShareAlike license, unless stated otherwise. Cite this article:
Sutton Castle, Dublin Facts for Kids. Kiddle Encyclopedia.