Kids Encyclopedia Facts
Not to be confused with Irish National War Memorial Gardens. 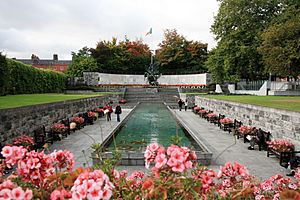 The Garden of Remembrance (Irish: An Gairdín Cuimhneacháin) is a memorial garden in Dublin dedicated to the memory of "all those who gave their lives in the cause of Irish Freedom". It is located in the northern fifth of the former Rotunda Gardens in Parnell Square, a Georgian square at the northern end of O'Connell Street. 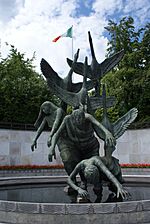 The Garden commemorates freedom fighters from various uprisings, including:

The site of the Garden is where the Irish Volunteers were founded in 1913, and where several leaders of the 1916 Rising were held overnight before being taken to Kilmainham Gaol. President Éamon de Valera opened the Garden in 1966 on the fiftieth anniversary of the 1916 Easter Rising, in which he had been a commander. 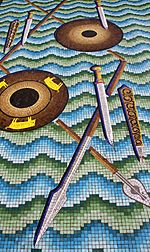 In Celtic custom, on concluding a battle, the weapons were broken and cast in the river, to signify the end of hostilities.

The Garden was designed by Dáithí Hanly. It is in the form of a sunken cruciform water-feature. Its focal point is a statue of the Children of Lir by Oisín Kelly, symbolising rebirth and resurrection, added in 1971.

In 1976, a contest was held to find a poem which could express the appreciation and inspiration of this struggle for freedom. The winner was Dublin born author Liam Mac Uistín, whose poem "We Saw a Vision", an aisling style poem, is written in Irish, French, and English on the stone wall of the monument. The aisling ( "vision") form was used in eighteenth-century poems longing for an end to Ireland's miserable condition.

Saoirse (freedom in the Irish language) in the aisling in the Garden of Remembrance.

In Irish the poem reads:

In 2004, it was suggested that as part of the redesign of the square the Garden of Remembrance itself might be redesigned. This led to the construction of a new entrance on the garden's northern side in 2007.

Queen Elizabeth II laid a wreath in the Garden of Remembrance during her state visit in May 2011, a gesture that was much praised in the Irish media, and which was also attended, upon invitation, by the widow and daughter of the garden's designer Dáithí Hanly.

All content from Kiddle encyclopedia articles (including the article images and facts) can be freely used under Attribution-ShareAlike license, unless stated otherwise. Cite this article:
Garden of Remembrance (Dublin) Facts for Kids. Kiddle Encyclopedia.