The gallery was founded by Sir Hugh Lane on Harcourt Street in 1908, and is the first known public gallery of modern art in the world. There is no admission fee and the gallery is completely wheelchair-accessible. The gallery was closed for reconstruction in 2004, and reopened in May 2006, with a new extension by Gilroy McMahon Architects.

The museum has a permanent collection and hosts exhibitions, mostly by contemporary Irish artists. It has a dedicated Sean Scully room. Francis Bacon's studio was reconstructed in the gallery in 2001 after being dismantled and moved from London starting in 1998. 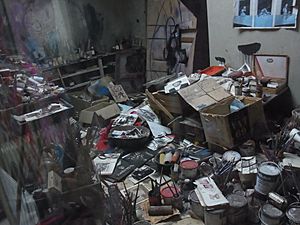 The Hugh Lane is notable for its collection of French art, including works such as The Umbrellas (Les Parapluies) by Auguste Renoir; Portrait of Eva Gonzalès by Édouard Manet, Jour d’Été by Berthe Morisot and View of Louveciennes by Camille Pissarro.

In 1992, the painting In The Omnibus by Honoré Daumier was stolen from the gallery, and recovered in 2014.

All content from Kiddle encyclopedia articles (including the article images and facts) can be freely used under Attribution-ShareAlike license, unless stated otherwise. Cite this article:
Hugh Lane Gallery Facts for Kids. Kiddle Encyclopedia.