The National Botanic Gardens (Irish: Garraithe Náisiúnta na Lus) are located in Glasnevin, 5 km north-west of Dublin city centre, Ireland. The 19.5 hectares are situated between Prospect Cemetery and the River Tolka where it forms part of that river's floodplain.

The gardens were founded in 1795 by the Dublin Society (later the Royal Dublin Society) and they have grown to hold 20,000 living plants and many millions of dried plant specimens. There are several architecturally notable greenhouses. Today the Glasnevin site is the headquarters of the National Botanic Gardens of Ireland which has a satellite garden at Kilmcurragh in county Wicklow. The botanic garden participates in national and international initiatives for biodiversity conservation and sustainable development. The Director, Dr. Matthew Jebb, is also Chairman of PlantNetwork: The Plant Collections Network of Britain and Ireland. It is Ireland's seventh most visited attraction, and the second most visited free attraction.

The Curvilinear Range of glasshouses designed by Richard Turner

The poet Thomas Tickell owned a house and small estate in Glasnevin and, in 1795, they were sold to the Irish Parliament and given to the Royal Dublin Society for them to establish Ireland's first botanic gardens. A double line of yew trees, known as "Addison's Walk" survives from this period. The original purpose of the gardens had been to advance knowledge of plants for agriculture, medicine and dyeing. The gardens were the first location in Ireland where the infection responsible for the 1845–1847 potato famine was identified. Throughout the famine, research to stop the infection was undertaken at the gardens.

Walter Wade and John Underwood, the first Director and Superintendent respectively, executed the layout of the gardens, but, when Wade died in 1825, they declined for some years. From 1834, Director Ninian Nivan brought new life into the gardens, performing some redesign. This programme of change and development continued with the following Directors into the late 1960s.

Wittgenstein plaque in the Palm House.

The gardens were placed into government care in 1877.

In the winter of 1948/9 Ludwig Wittgenstein lived and worked in Ireland. He frequently came to the Palm House to sit and write. There is a plaque commemorating him on the steps he sat on.

As well as being a tourist destination and an amenity for nearby residents, it also serves as a centre for horticultural research and training, including the breeding of many prized orchids.

Orchid in the Botanic Gardens collection

The soil at Glasnevin is strongly alkaline (in horticultural terms) and this restricts the cultivation of calcifuge plants such as rhododendrons to specially prepared areas. Nonetheless, the gardens display a range of outdoor "habitats" such as a rockery, herbaceous border, rose garden, bog garden and arboretum. A vegetable garden has also been established. The National Herbarium is also housed at the National Botanic Gardens. The museum collection contains some 20,000 samples of plant products, including fruits, seeds, wood, fibres, plant extracts and artefacts, collected over the garden's two-hundred-year history. The gardens contain noted and historically important collections of orchids. The newly restored Palm House houses many tropical and subtropical plants.

In 2002, a new multistorey complex was built; it includes a cafe and a large lecture theatre. It has responsibility for the Arboretum at Kilmacurragh, County Wicklow, a centre noted for its conifers and calcifuges. This is located some 50 kilometres (31 miles) south of Dublin. 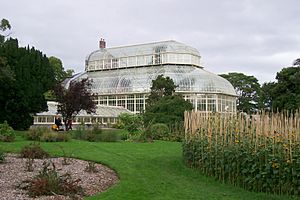 The gardens include some glasshouses of architectural importance, such as the Palm House and the Curvilinear Range.

The Great Palm House is situated in the southern parts of the gardens, and is connected to the cactus house on its west side, and the orchid house on its east side. The main building measures 65 feet in height, 100 feet in length and 80 feet in width.

The Palm House was originally built in 1862 to accommodate the ever increasing collection of plants from tropical areas that demanded more and more protected growing conditions. The construction was overseen by David Moore,the curator of the gardens at the time. The original structure was built of wood, and was unstable, leading to it being blown down by heavy gales in 1883, twenty one years later. Richard Turner, the great Dublin ironmaster, had already supplied an iron house to Belfast Gardens and he persuaded the Royal Dublin Society that such a house would be a better investment than a wooden house, and by 1883 construction had begun on a stronger iron structure. Fabrication of the structure took place in Paisley, Scotland, and shipped to Ireland in sections. By the early 2000s, the Palm House had fallen into a state of disrepair. After more than 100 years, the wrought iron, cast iron and timber construction had seriously deteriorated. Prior to its restoration a large number of panes of glass were breaking each year due to the corrosion and instability of the structure. As part of the restoration the house was completely dismantled into more than 7,000 parts, tagged for repair and restoration off-site. 20 meter tall cast iron columns within the Great Palm House had seriously degraded and were replaced by new cast iron columns created in moulds of the originals. To protect the structure from further corrosion, new modern paint technology was used to develop long-term protection for the Palm House, providing protection from the perpetually tropical internal climate. For Health and Safety reasons, overhead glass was laminated and vertical panes toughened, and specialised form of mastic was used to fix the panes, replacing original linseed oil putty that had contributed to the decay of the building over the century. The Palm House was reopened in 2004 after a lengthy replanting programme following the restoration process.

The Curvilinear Range was completed in 1848 by Richard Turner, and was extended in the late 1860s. This structure, has also been restored (using some surplus contemporary structural ironwork from Kew Gardens) and this work attracted the Europa Nostra award for excellence in conservation architecture.

There is also a third range of glasshouses: the Aquatic House, the Fern House and the original Cactus House. Unfortunately, these structures were closed off in the early 2000s, and are currently undergoing restoration. As these glasshouses were specialised in the plants they housed, many specimens such as the Giant Amazonian Water Lily have not been grown in the gardens since the closure of the structures.

All content from Kiddle encyclopedia articles (including the article images and facts) can be freely used under Attribution-ShareAlike license, unless stated otherwise. Cite this article:
National Botanic Gardens (Ireland) Facts for Kids. Kiddle Encyclopedia.