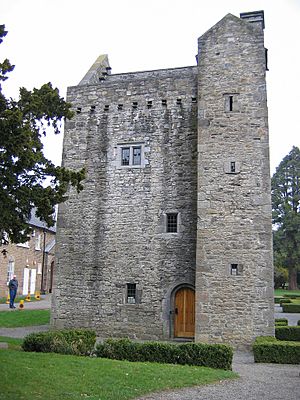 Ashtown Castle, although named after the town land, actually lies in Castleknock, Phoenix Park to the south

Ashtown (Irish: Baile an Áisigh) is a townland in the civil parish of Castleknock in the postal district of Dublin 15. It is bounded roughly by the townlands of Castleknock to the west, Cabra to the east and by Finglas to the north-east and Dunsink to the north-west. It is situated by the Royal Canal, near the N3 Navan Road. The Phoenix Park is also nearby, its Ashtown Gate entrance about 500 metres south of the railway station. The "Belleville" and "Paddock" housing estates lie within the territory of Dublin City Council; the remainder of the townland's 278 acres are within Fingal.

The Dublin-Sligo railway passes through the area and it is served by Ashtown railway station, which opened on 1 August 1902. Stopping at Ashtown is the Western Commuter service, which runs frequently between Maynooth and Pearse Station in the city centre. The area is also served by the 120 Dublin Bus route, which terminates at the railway station, and by the 37, 38, 39 and 70 routes, which pass nearby on the Navan Road.

LUAS (light rail / tram) will be available to and from nearby Broombridge from approximately late 2017.

All content from Kiddle encyclopedia articles (including the article images and facts) can be freely used under Attribution-ShareAlike license, unless stated otherwise. Cite this article:
Ashtown, Dublin Facts for Kids. Kiddle Encyclopedia.