Kids Encyclopedia Facts
This page is about the suburb of Dublin. For other uses, see Cabra.

Cabra (Irish: An Chabrach, meaning the poor land) is a suburb on the northside of Dublin city in Ireland. It is approximately 2 kilometres (1.2 mi) northwest of the city centre, in the administrative area of Dublin City Council. It was commonly known as Cabragh until the early 20th century. Cabra is also a parish in the Fingal South West deanery of the Roman Catholic Archdiocese of Dublin.

Suburban rail stops in the rundown Broombridge railway station, en route to Maynooth. As part of the government's Transport 21 strategy, there are plans to extend the Luas, Dublin's light rail system. By linking the present "red line" to Dublin Airport, there would be stops at local areas like Liffey Junction and the new Dublin Institute of Technology campus at Grangegorman.

The main Dublin to Cavan road, the N3, travels through Cabra and links up with M50 Junction 6 at Blanchardstown.

From about 1480, the manor of Cabra was held by a branch of the Plunket family, later ennobled as Earls of Fingall, whose main residence was Dunsoghly Castle near Finglas.

There are three contiguous townlands called "Cabra", each in a different civil parish: Castleknock, Glasnevin and Grangegorman. The three met at the gate lodge of "Cabragh House", which is today the situation of the roundabout at the junction of Ratoath Road and Drumcliffe Road. "Cabragh House" was located where the current Canon Burke Senior Citizens Flats complex stands. Completed in 1598, it was first occupied by the Segrave family. The mansion was then the home of the hanging judge Lord Norbery until he died in 1831 and the Segrave family managed to acquire it again. Charles Segrave, whose son was the famous racing driver Henry Segrave lived there until 1912. The big house was bought by Dublin Corporation by way of a compulsory purchase order in 1939 for the construction of local authority housing and the historic house was razed to the ground.

Until the 1920s, when large scale housing developments took place, the area mostly comprised fields and open countryside on the edge of the city. Many of the people who moved to the new suburb were from the city centre slums.

Quarry Road was originally called Quarry Lane after a small quarry which was situated near where the current statue of Our Blessed Lady is located at the roundabout with Fassaugh Road (which originally was called Fassaugh Lane.) This quarry was filled in the early part of the 1900s and the family who lived in the Homestead grew cabbages on the reclaimed land.

The Industrial Revolution brought the construction of the Royal Canal in 1790 and the laying of the Dublin-Galway railway line of which both went through the heart of the area. From about 1880-1930, Cabra was a prominent market garden centre and a giant lairage, where cattle being brought to market at Hanlon's Corner were kept in pens and grazing fields.

Numerous footballers hail from Cabra, including Republic of Ireland international goalkeeper Wayne Henderson, and Eamonn Fagan and Liam Whelan, both from St. Attracta's Road. Whelan was one of the Manchester United Busby Babes who died in the Munich air disaster of 1958, and Connaught Bridge was later renamed in his memory. The former Leeds United and Irish player and manager Johnny Giles also hails from the area. Roddy Collins, former manager of Bohemians, Shamrock Rovers and Maltese side Floriana, lived in Cabra before being appointed manager of Cork City.

The suburb's most infamous former resident was John Toler, 1st Earl of Norbury, otherwise known as the hanging judge, who lived at Cabragh House on the corner of the present day Fassaugh Avenue and Rathoath Road. One of the world's most famous mathematicians, William Rowan Hamilton, who freed algebra from the commutative postulate of multiplication (that the order or sequence of factors does not determine the result) was associated with the area. There is a plaque in his honour at the Broom Bridge.

Cabra West has many factories in the industrial park and also along Bannow Road, one of the most famous of these being the Batchelors beans factory.

The Roman Catholic church of Christ the King was built during the years following the Eucumenical Congress of 1932. It seemed appropriate to employ John J. Robinson of Robinson and Keefe to design the new church, as he had been Architect for all the structures (Phoenix Park, Merrion Road, O'Connell bridge etc.) built for the Congress. The church which is cross shaped in plan was built in red brick with a huge statue of Christ integrated into the tower which is on the axis of the approach road. An Architect's perspective drawing of the church exists in the Irish Architectural Archive in Merrion Square. This church shares many features with St. Therese Mount Merrion which was built by the same Architect some 20 years later. Robinson is also famed as being Architect to Galway Cathedral. 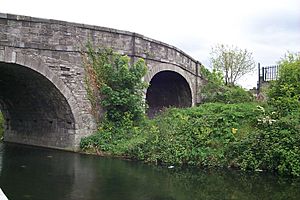 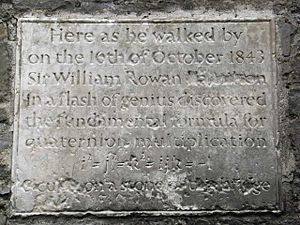 Plaque on Broom Bridge, commemorating where William Rowan Hamilton inscribed his formula for quaternions on 16 October 1843

Broom Bridge, also known as Brougham Bridge, is a small bridge along Broombridge Road which crosses the Royal Canal in Cabra. The bridge is named after William Broom, one of the directors of the Royal Canal company. Broom Bridge is the location where Sir William Rowan Hamilton, following a 'eureka experience', first wrote down the fundamental formula for quaternions on 16 October 1843, which is to this day commemorated by a stone plaque on the northwest corner of the underside of the bridge. The text on the plaque reads:

Given the historical importance of the mathematical contribution, mathematicians have been known to make a pilgrimage of sorts to the site.

All content from Kiddle encyclopedia articles (including the article images and facts) can be freely used under Attribution-ShareAlike license, unless stated otherwise. Cite this article:
Cabra, Dublin Facts for Kids. Kiddle Encyclopedia.