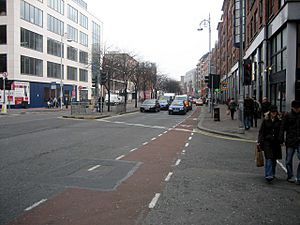 Parnell Street (Irish: Sráid Pharnell) is located on Dublin's Northside and runs from Capel Street in the west to Gardiner Street and Mountjoy Square in the east. It is at the north end of O'Connell Street, where it provides the south side of Parnell Square.

Originally Parnell Street was part of the ancient road connecting the old city to northern coast, with Father Matthew Bridge connecting Church Street and Wood Quay in the east, to Ballybough and Fairview in the west. During the 18th century development of Amiens Street and Annesley Bridge provided a new coast road, while Parnell Street and its continuation to the east, Summerhill, became home to Georgian architecture.

The western end of Parnell Street has been substantially redeveloped in recent years. This urban regeneration came after road plans by Dublin Corporation devastated the street during the 1970s, when it was scheduled to be part of the [Inner Tangent Road scheme, massive dereliction and blight caused. Virtually all of the original Georgian architecture was destroyed and subsequently replaced by buildings of much larger scale. The eastern end of Parnell Street, having remained comparatively undeveloped, is now home to a thriving immigrant community. Most notably, a plethora of authentic Chinese and Korean restaurants have lent the east side the reputation of being Dublin's "Chinatown". There is also a significant presence of African and East and Central European businesses at the eastern end.

Formerly Great Britain Street, the street was renamed after Charles Stewart Parnell (1846–1891), Dublin Corporation adopting a resolution to rename the street following his death. The Rotunda Hospital, the Ambassador Theatre and the Gate Theatre are on Parnell Street itself while the Garden of Remembrance, the Dublin Writers Museum and the Hugh Lane Gallery are on the north side of the Parnell Square. The James Joyce Centre is immediately off Parnell Street on North Great Georges Street, while located just off the eastern end is the historic Mountjoy Square.

All content from Kiddle encyclopedia articles (including the article images and facts) can be freely used under Attribution-ShareAlike license, unless stated otherwise. Cite this article:
Parnell Street Facts for Kids. Kiddle Encyclopedia.