Lucan (Irish: Leamhcán, meaning place of elms) is a village and suburb in South County Dublin. It is located 13 km from Dublin city centre and is situated on the River Liffey and River Griffeen. It is located just off the N4 road and is close to the county boundary with County Kildare.

In the Irish language, 'leamhcán' means 'place of the elm trees'. Another interpretation "Place of the Marshmallows" is mentioned in Francis Elrington Ball's "History of the County Dublin" (1906), marshmallow being the flower and not the confectionery. "The name probably comes from a people that travelled by river, as Lucan is the first place that elm trees are encountered if travelling inland from the Liffey.

There is evidence of pre-historic settlement around Vesey Park, though not much archaeological investigation has been carried out in the area. There is a suggestion that an ancient road that linked into the Tara network ran through what is now modern Lucan village, continuing up the hill towards Esker Cemetery.

When Oliver Cromwell came to Ireland, Lucan was a village of 120 inhabitants.

In 1566 Sir William Sarsfield acquired Lucan Manor, and the property became closely associated with the Sarsfield family. Patrick Sarsfield, the Irish Jacobite leader, was born in Lucan and was granted the title Earl of Lucan by King James II.

Currently on the site of Sarsfield's castle beside the town is Lucan House, built around 1770 by Rt. Hon. Agmondisham Vesey, who had married into the Sarsfield family. The circular ground floor dining room is said to have been an inspiration for the Oval Office of the White House. The decorative plasterwork was carried out by Michael Stapleton. Over the years, the house passed out of the Vesey family and since 1947, has been the residence of the Italian ambassador to Ireland. In the grounds of the house is the spa, the waters of which attracted people to the town in previous times.

The influence of the Sarsfield and Vesey families on Lucan is still apparent in the locality. For example, the local Gaelic Athletic Association club is Lucan Sarsfields and a pub in the town bears the name 'The Vesey Arms' aka Kenny's.

The discovery of a sulphurous spa in Lucan in 1758 brought the district into prominence, and it became a mecca for weekend parties from Dublin and the surrounding countryside. A ballroom was erected and subsequently a hotel.

Most of the structures in Lucan Village were constructed as part of a large redevelopment of the town around 1815.

It is said that the oldest bridge in Ireland, King John's bridge, is in Lucan in Griffeen Park. Griffeen Park is the most popular park in Lucan named after the River Griffeen which flows through it. Griffeen park holds many facilities such as football and GAA pitches, a playground, a leisure centre, and also a skate park.

Lucan village is located north of the N4/M4 national primary west/northwest motorway. The village is approximately 5K west of the M50 Dublin ring road. An outer-orbital distributor called the Outer Ring Road, designated as R136, from the N4 (Woodies) interchange to the N81 Tallaght Bypass was completed in 2008.

Lucan is located between two major national/commuter railway lines. The original Lucan North (Leixlip) Station on the north/northwest line and Lucan South station on the south/southwest line were closed in 1941 and 1947 respectively. The green field development of the Lucan townlands as a major residential area was predicated on the prime location between the motorways and railways. Adamstown railway station has recently re-opened to serve the area. It is located south of Finnstown, Lucan. This station will also service significant further developments planned to the south of Adamstown townlands and the south/southwest commuter line.

A new Luas line for the town was planned under Transport 21. The town was to be included the Metro West line. Both projects are now abandoned.

Dublin Bus provides several bus services to the area, including the following

Feeder routes such as the 239 from Liffey Valley shopping centre to Blanchardstown via the north of the town along the Strawberry Beds also run. Dublin Bus provides Nitelink services with the 25N serving south Lucan and the 66N serving Lucan village. Some independent bus operators also serve Lucan.

Lucan has an airport, Weston Airport, located to the west of Lucan near the Dublin/Kildare border. This expanding facility conducts pilot training and serves privately owned light aircraft and helicopters. It new terminal is located south of the M4 to the east of the Dublin Celbridge Road and Kildare border. 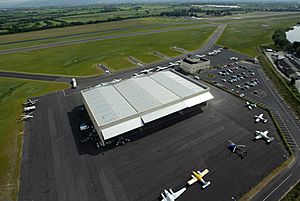 Lucan House is a seven bay two storey over basement country house. It was built in the late eighteenth century, when Agmonisham Vesey cleared the previous residence and commenced construction in 1772. The architecture is in part the work of Agmondisham and also William Chambers with Michael Stapleton responsible for the plasterwork. The estate passed through the Sarsfield, Vesey and Colthurst families through marriage and in 1954 became residence of the Italian Ambassador. The remainder of the estate land is now Liffey Valley Park. 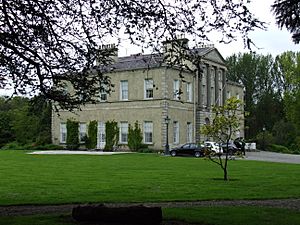 Residence of the Italian Ambassador

The Griffeen Valley Park runs along the Griffeen River, with some smaller outlying park areas among housing developments to the West. The main area of the park is split by the Lucan Bypass, with Vesey Park on one side and Griffeen Park on the other. The most important feature of the Griffeen Valley Park is the old woodland in Vesey Park that was retained when the park was formed. This woodland is most extensive along the Griffeen River and contains mature deciduous and coniferous trees. The most important area on the river is the wet woodland containing the most extensive fern and bryophyte growth recorded in the five parks surveyed. The woodland also provides the habitat for the protected species Hypericum hirsutum. 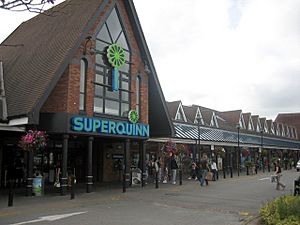 The area is primarily a residential one, though employment does exist. One of the major employers within the region is the Liffey Valley Shopping Centre in North Clondalkin, though there are a number of other businesses in the area. There are major businesses in the nearby areas of southwest Dublin such as Citywest and Tallaght. Intel and Hewlett-Packard are also major employers, located nearby in Leixlip, Co. Kildare, with further employment close by in Blanchardstown, in Fingal, such as eBay's European operations. There are various nursing homes in Lucan including Lucan Lodge Nursing Home at Ardeevin Drive, Lucan Village which can accommodate 72 residents and employs more than 70 people. Lucan is mainly a large commuter town with the majority of the working inhabitants travelling into Dublin on the bus or by car. Lucan is also home of many different public houses, six of which are all located in Lucan village. These pubs are a good source of employment as they need staff to run day time and also night time shifts.

In September 2013, Lucan Village took the South Dublin title for Tidy Towns. Lucan Tidy Towns came up trumps in the SuperValu Tidy Towns award contest, winning first place in the South Dublin County Category. Its environmental group received the first prize of €1,000 for their efforts at keeping Lucan a tidy place to live in.

On Friday November 11, 2016 Greg Waters and Emer Kavanagh attended the National White Flag Awards in the Hudson Bay Hotel where they were presented with Gold Standard Award for Leisure facilities. Although Lucan Leisure Centre is one of the longest participating facilities in the White Flag audit process nationwide and has, in previous years achieved the Bronze standard it is a massive achievement to be awarded Gold and indicates the efforts being made to provide excellent customer service and activities in the facility.

All content from Kiddle encyclopedia articles (including the article images and facts) can be freely used under Attribution-ShareAlike license, unless stated otherwise. Cite this article:
Lucan, Dublin Facts for Kids. Kiddle Encyclopedia.