The cathedral is the location for a number of public national ceremonies. Ireland's Remembrance Day ceremonies, hosted by the Royal British Legion and attended by the President of Ireland, take place there every November. Its carol service (the Service of Nine Lessons and Carols), celebrated twice in December, including every 24 December, is a colourful feature of Dublin life.

On Saturdays in autumn the cathedral hosts over twelve ceremonies at which new graduates of Dublin Institute of Technology receive their degrees.

The cathedral, which generally receives no State funding, welcomes all, with a chapel for those who come simply to pray and a small fee for those who wish to sight-see. The Cathedral website mentioned in 2006 that visitor numbers had reached around 300,000 a year.

The cathedral is supported by a volunteer organisation, with both subscribing and life members, who perform various tasks and contribute materially to the work and fabric of the cathedral. In addition, there are a range of voluntary groups performing specific tasks, such as bell-ringing, welcoming of guests and cleaning.

In 2006, the cathedral's national prominence was used by a group of 18 Afghan migrants seeking asylum, who occupied it for several days before being persuaded to leave without trouble. 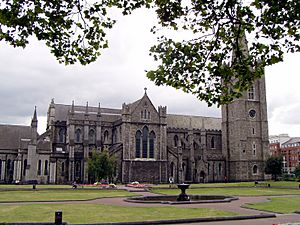 In 1192, John Comyn, first Anglo-Norman Archbishop of Dublin, elevated one of the four Dublin Celtic parish churches, the one dedicated to Saint Patrick, beside a holy well of the same name and on an island between two branches of the River Poddle, to the status of a collegiate church, i.e., a church with a body of clergy devoted to both worship and learning. The church was dedicated to "God, our Blessed Lady Mary and St Patrick" on 17 March 1191.

The basis of the present building, as noted, the largest church in Ireland, was built between 1191 and 1270, though little now remains of the earliest work beyond the Baptistry.

An order from King Henry III in 1225 allowed the collection of donations from across the island for reconstruction for a period of four years, and the work, in the Early English Gothic style, lasted at least until re-dedication in 1254. 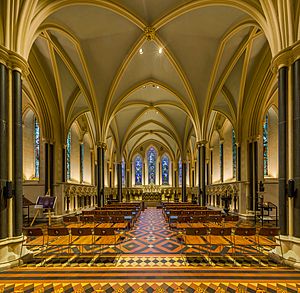 The tower (Minot's Tower) and west nave were rebuilt between 1362 and 1370, following a fire. The name commemorates Thomas Minot, Archbishop of Dublin 1363–75, who oversaw the rebuilding.

From the very earliest years there were problems with seepage of water, with a number of floods, especially in the later years of the 18th century, caused by the surrounding branches of the River Poddle – even in the 20th century, it is reported that the water table was within 2.3 metres (7.5 feet) of the floor. This situation ensured there would never be a crypt or basement area. 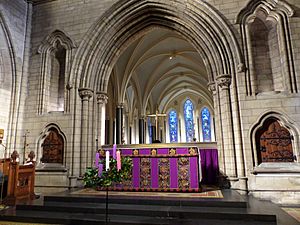 The choir school continues and although originally all-male, now also admits girls; a Cathedral Girls' Choir was founded in 2000 and sings once or twice a week. The girls are mostly from either the choir school or St Patrick's Grammar School, which provides a secondary education. It is no longer compulsory for grammar school pupils to be in the choirs, although many of the girls are, and a few boys; many of the boys leave when their voice breaks.

Choirboys are considered professional singers and are paid monthly for their services. The girls are not. The choir also sings very occasionally at weddings for the well-off and receive payment for this. Until 1998 they received a large discount on their education; they are still offered free music lessons. 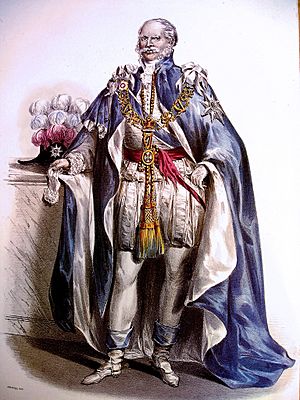 Knight of the Order of St Patrick

All content from Kiddle encyclopedia articles (including the article images and facts) can be freely used under Attribution-ShareAlike license, unless stated otherwise. Cite this article:
St Patrick's Cathedral, Dublin Facts for Kids. Kiddle Encyclopedia.