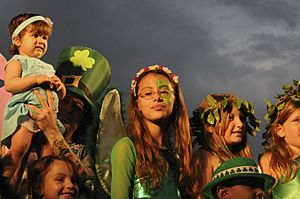 Saint Patrick (about 402 - March 17, probably 491 or 493) is the patron saint of Ireland and Nigeria. He was born in a village in Roman Britain. When he was 16 years old he was captured and sold into slavery. He also married couples when the king prohibited it.

Saint Patrick came from a Christian family. He was the son of Calpornius, who was a deacon. He brought Christianity to Ireland. He converted many pagans to Christianity. He also challenged many of their leaders and druids such as Aodhan the Brave also known as Chief Aodhan. St.Patrick eventually converted Chief Aodhan and they worked together to convert many other pagans.

St. Patrick's Day is celebrated every year on March 17 in his honour.

There is a bell in the National Museum of Ireland that was made around the time of Saint Patrick's life. There is no evidence that Saint Patrick owned the bell but the Irish have believed the bell belonged to Saint Patrick for 1400 years. One of the kings of Ulster who was the high king of Ireland at the time had a beautiful cover made out of gold and gems to preserve the bell. The names of the bishops of Ireland were engraved on the cover. The style of the letters on the cover were used to make the first typewriters. It is believed that the bell was rung by Saint Patrick to let people know it was time for church.

Saint Patrick and the snakes

There are no snakes in Ireland but there is a legend that at the time of Saint Patrick there were lots of snakes and he chased them all into the Irish Sea. Some say that this legend came to be because pagans had tattoos of snakes and Saint Patrick got rid of the pagans by teaching Christianity and therefore drove out the snakes from Ireland.

Holy Trinity and the Shamrock

All content from Kiddle encyclopedia articles (including the article images and facts) can be freely used under Attribution-ShareAlike license, unless stated otherwise. Cite this article:
Saint Patrick Facts for Kids. Kiddle Encyclopedia.