George Fredrick Handel (German : Georg Friedrich Händel) (23 February 1685 – 14 April 1759) was a German composer who went to live in England when he was a young man and later became a naturalised Briton. Johann Sebastian Bach and Handel were born in the same year. They were the greatest composers of their time, but they never met. Handel changed his name to George Frideric Handel when he became British; he removed the dots above the "a" and changed the spelling of Georg and Friedrich. The German spelling of his name (Georg Friedrich Händel) is still used by German writers.

Although they both lived in the late Baroque period, Bach and Handel’s music developed differently. Handel wrote many operas and oratorios and by them became very famous. He took many trips, including to Italy where he learned a lot about composition. Bach never left central Germany, and most of the time he was a church musician who was not well known by the general public.

Handel wrote over 42 operas. Later he wrote oratorios. His most famous oratorio is the Messiah. He wrote anthems, chamber music and orchestral music including the Water Music and Music for the Royal Fireworks.

Handel was born in Halle in the northeast of Germany, in today's Saxony-Anhalt. His father was a barber and a surgeon. He started playing the harpsichord and the organ when he was very young. He was given a clavichord when he was seven and he used to practice it in the attic where his father could not hear him. At the age of nine he was already composing. He had a teacher called Friedrich Wilhelm Zachow who was the organist of the big church, the Marienkirche, in Halle. He learned the organ, harpsichord and violin as well as composition, harmony.

Handel’s father did not want him to study music; he wanted him to be a lawyer. Although Handel's father died in 1697, Handel enrolled at the University of Halle in 1703. He studied law for a year because his father wanted him to do so. After that year, Handel was unhappy studying law. He decided to stop studying law and become a musician. He became organist at the Protestant Cathedral in Halle. The next year he moved to Hamburg where he got a job as violinist and harpsichordist in the orchestra of the opera-house. Here his first two operas, Almira and Nero, were produced early in 1705. Two other early operas, Daphne and Florindo, were produced at Hamburg in 1708.

Handel was becoming a good opera composer, but he wanted to learn more, so he went to Italy in 1707. He spent four years there. His opera Rodrigo was produced in Florence in 1707, and his Agrippina at Venice in 1709. Agrippina was very popular and had 26 performances. It made Handel famous. He also had three oratorios produced in Rome. He wrote sacred music (church music) and other pieces in an operatic style, e.g. Dixit Dominus (1707). 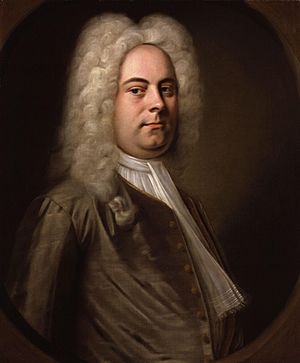 In 1710 Handel became Kapellmeister (music director) to George, Elector of Hanover, who would soon be King George I of Great Britain. The Elector agreed that Handel could have an immediate leave of 12 months so that he could go to London. He visited London for eight months. His opera Rinaldo was performed in 1711. It was the first time an Italian opera had been performed in England. It was an immediate success. Handel returned to Hanover in the summer of 1711 and spent a year writing chamber and orchestral music because there was no opera in Hanover. He was also trying to learn English. In 1712 the Elector allowed him to make another visit to England. In England he had patrons (rich people who gave him money). He had a yearly income of £200 from Queen Anne (while Bach earned as little as eighty pounds in a year). He was having a lot of success, and so stayed in England instead of returning to his job in the Hanover Court.

In 1712 Queen Anne died and the Elector of Hanover became King of Great Britain. Handel might have been in trouble for staying in Britain. According to one story the King forgave Handel because he wrote some lovely music called Water Music which was performed on a boat on the Thames at a royal water party. This story about the king forgiving Handel is probably not true. George would have known that Queen Anne was about to die and he would become King of Great Britain and therefore Handel's master again. In fact, the new king doubled Handel’s salary. A few years later his salary increased again when he taught music to Queen Caroline’s daughter.

In 1724 Handel moved into a newly built house in 25 Brook Street, London, which he rented until his death in 1759, 35 years later. The house is now called Handel House Museum and is open to the public. It was here that Handel composed some of his most famous music such as Messiah, Zadok the Priest, and Fireworks Music.

In 1729 Handel's opera Scipio (Scipio) was performed for the first time. The march from this work is now the regimental slow march of the British Grenadier Guards. In the next year he took on British nationality.

Handel spent most of his time working on operas. From 1722-1726 he was director of the Royal Academy of Music. This was an organisation that put on opera performances. It had nothing to do with the academy which is called the Royal Academy of Music today where young students study music. Handel also worked in the management of the King's Theatres and many of his operas were performed in the Royal Opera House at Covent Garden. He sometimes travelled to Italy to find new Italian singers and persuade them to come to London. London became world famous for operas. In spite of everything Handel was doing for opera he had many enemies as well as friends. There was a lot of rivalry, especially with a composer called Bononcini whose music is forgotten today. Handel gave up operatic management in 1740, after he had lost a lot of money in the business.

In April 1739, age 54, he had a stroke. It was probably this which left his right arm paralysed for a while so that he could not perform, but he made an excellent recovery after six weeks at a health spa in Aix-la-Chapelle. At this time he started to write oratorios instead of operas. In 1742 his oratorio Messiah was first performed in Dublin. Surprisingly, it was not successful in London until 1750 when it was performed in aid of the Foundling Hospital Chapel. Handel performed it every year there, which brought the hospital about £600 for each performance. Handel spent most of his time in these later years composing and producing oratorios. Judas Maccabaeus was particularly popular. The singers for these oratorios were English and Italian. They were not world-famous virtuosos but singers whom Handel had trained himself.

In August, 1750, on a journey back from Germany to London, Handel was seriously injured when his carriage overturned. In 1751 he started to lose his eyesight. He died, in 1759, in London. The last concert he went to was his own Messiah. More than 3,000 mourners went to his funeral. He was buried with full state honours in Westminster Abbey. Handel never married, and kept his personal life very private. He left £20,000 which was a lot of money for those days (Approximately 2800000 pounds today) His niece inherited most of his money. He also left some of it to friends, servants, relations and charities. His autographs (the original copies of the music that he wrote) are now mostly in the British Museum.

Handel adopted the spelling "George Frideric Handel" on his naturalization as a British subject, and this spelling is generally used in English speaking countries. The original form of his name (Georg Friedrich Händel) is usually used in Germany, but he is known as "Haendel" in France. There was another composer with a similar name, Handl, who was a Slovene and is more commonly known as Jacobus Gallus. This can be very hard for cataloguers (people trying to make a list of his music)

All content from Kiddle encyclopedia articles (including the article images and facts) can be freely used under Attribution-ShareAlike license, unless stated otherwise. Cite this article:
George Frideric Handel Facts for Kids. Kiddle Encyclopedia.