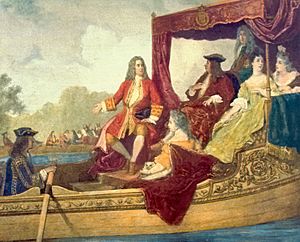 George Frideric Handel (left) and King George I on the Thames, 17 July 1717

Legend says the three suites were first played on a trip taken by King George I of England up the Thames to Chelsea or Lambeth on 17 July 1717. The King had known Handel for a long time. For some reason though, he was angry with Handel. The Water Music was Handel's way of appeasing the King. Fifty musicians floated alongside the King's barge playing the suites. The King was so pleased he ordered Water Music played three times.

Another Legend has it that He played it for a party King George I was having. It says he hired Handel to write a piece of music for him and his royal friends to listen to while sailing in the water; thus the name Water Music

All the instruments in the Baroque orchestra were included in the composition, except the harpsichord and timpani. It would have been difficult to bring these instruments aboard a barge. The instruments in a complete performance are a flute, two recorders, two oboes, one bassoon, two horns, two trumpets, strings, and continuo.

All content from Kiddle encyclopedia articles (including the article images and facts) can be freely used under Attribution-ShareAlike license, unless stated otherwise. Cite this article:
Water Music (Handel) Facts for Kids. Kiddle Encyclopedia.