Texola is a town in Beckham County, Oklahoma, United States. The population was 36 at the 2010 census. 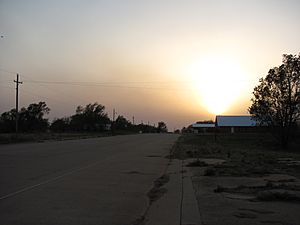 Texola is not directly served by the Oklahoma state highway system. However, the town can be accessed from I-40 Exit 1. U.S. Route 66 passed through the town, bringing scores of travelers, for decades until I-40 was completed to the north in 1975.

The History of Texola dates back to the early 1900s. Before being named Texola, the town site had been called Texokla and Texoma. Because of its location near the 100th Meridian, the town was surveyed eight different times, which meant that some early residents lived in both Texas and Oklahoma without ever moving. Texola was originally part of northern Greer County until Beckham County was formed after Oklahoma gained statehood in 1907. A post office was established in the community on December 12, 1901 with Reuben H. Grimes serving as the first postmaster. In 1902, the Choctaw, Oklahoma and Gulf Railroad (later owned by the Chicago, Rock Island and Pacific Railway) was built through the town. A weekly newspaper, the Texola Herald, began publishing in 1902 and continued to operate into the early 1920s. By 1909, Texola had two cotton gins as well as a corn and grist mill. The local economy was agriculturally based and several businesses opened in the community.

The 1910 census recorded 361 people living in Texola. That same year, a small Territorial Jail was built. After a slight decline in population during the 1910s, Texola grew rapidly in the 1920s. The population peaked at 581 in the 1930 census. The arrival of Route 66 (also known as 5th Street) had a positive impact on the local economy. Cotton production increased during the decade, necessitating the need for two additional gins. As the town prospered, amenities such as a ten-acre park and an auditorium capable of seating 300 people were found in the community. The population began to decline in the 1940s and continued to do so throughout the remainder of the twentieth century. By 1980, Texola was a town of 106 residents. When the next census was conducted in 1990, Texola had lost nearly 58 percent of its population, leaving just 45 people in the town. That figure rose by two, to 47, in 2000. By 2010, the population had decreased to 36.

There were 21 households out of which 23.8% had children under the age of 18 living with them, 52.4% were married couples living together, 9.5% had a female householder with no husband present, and 33.3% were non-families. 23.8% of all households were made up of individuals and 14.3% had someone living alone who was 65 years of age or older. The average household size was 2.24 and the average family size was 2.57. 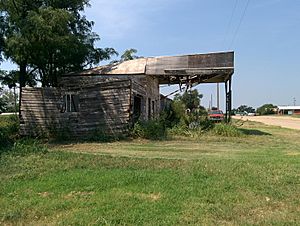 Magnolia Service Station in Texola, Oklahoma is listed on the National Register of Historic Places, it was placed on the list in 1995. The Station was built in 1930, by the Magnolia Petrolium Company on U.S. Route 66.

All content from Kiddle encyclopedia articles (including the article images and facts) can be freely used under Attribution-ShareAlike license, unless stated otherwise. Cite this article:
Texola, Oklahoma Facts for Kids. Kiddle Encyclopedia.