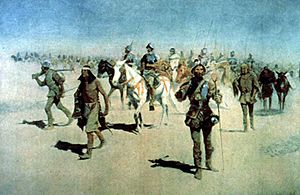 In 1541, Francisco Vásquez de Coronado became the first known European to pass through the area. The Spanish conquistador was traveling northeast across the prairie in search of a place called Quivira, a city said to be fabulously wealthy with gold. Because Coronado's route across the plains is speculative, it is quite possible that the expedition passed through present-day Elk City or the nearby area.

Elk City's history dates back to the days immediately following the opening of the Cheyenne-Arapaho reservation in western Oklahoma Territory on April 19, 1892, when the first white settlers made their appearance. Prior to this time, many early ranchers had driven cattle over the Great Western Cattle Trail from Texas to Dodge City, Kansas, the present townsite of Elk City being in the direct path of that famous trail.

The creation of Elk City was an idea conceived by land promoters from Weatherford, Oklahoma, when they learned that the Choctaw, Oklahoma and Gulf Railroad (CO & G) was coming to the area (in 1898, the CO & G Railroad completed its western route to Weatherford; beginning in 1901, it continued building west). They formed the Choctaw Townsite and Development Company. These men with great foresight determined that the area at the source of Elk Creek would be an ideal location for a town, so they came to the area to purchase lands from the homesteaders who had claims along the railroad.

Probably the most important day in Elk City's history is March 20, 1901, the date the first lots were sold by the Choctaw Townsite and Development Company. By this time, hundreds of prospective purchasers had built a tent city. On that day, the townsite company sold $32,000 worth of property (about $870,000 in 2012 dollars) and continued doing a good business for some time thereafter.

There is some confusion about how Elk City got its name. Elk City was so named because it is located at the head of Elk Creek, which in turn was named by U.S. Army Captain Randolph B. Marcy who was leading an expedition to explore the Red River in 1852. Marcy and his troops had left the Wichita Mountains and the waterway which he named Otter Creek during his exploration, and they were traveling northwest along the North Fork of the Red River. On May 31, in the official journal of the expedition, Marcy wrote about the productive soil, the dense grass, and the vertical red clay banks of a "bold running stream of good water." Continuing, he wrote, "From the circumstance of having seen elk tracks upon the stream we passed in our march today, I have called it 'Elk Creek'. I am informed by our guide that five years since, elk were frequently seen in the Wichita Mountains; but now they are seldom met with in this part of the country." Confusion also stems from the early post offices that served the residents of the town. Even though the town of Elk City has had only one name, its early settlers were served by a post office named Crowe, and later, one named Busch. Consequently, on many early maps of Oklahoma Territory the names of "Crowe" or "Busch" are seen instead of "Elk City". Finally, on July 20, 1907, shortly before statehood, the Busch Post Office had its name officially changed to Elk City Post Office.

On August 13, 1901, the Choctaw, Oklahoma and Gulf Railroad (purchased in 1904 by the Chicago, Rock Island and Pacific Railroad in 1904) laid its last rail on the so-called "Choctaw Route", bringing rail access to Elk City. The first regular train service commenced seven days later on August 20, and city folk rejoiced, predicting that the dugouts, claim shacks, and prairie stables would soon disappear and be replaced by handsome residences, commodious barns, and granaries. Later, in 1910, the Wichita Falls and Northwestern Railway, one of the Frank Kell and Joseph A. Kemp properties, reached from Wichita Falls, Texas, into the wheat-growing area of western Oklahoma. By 1912, the northern terminus was in Forgan in Beaver County in the Oklahoma Panhandle. The route through Elk City was abandoned in 1973, as Altus became the new northern terminus of the railroad, which was absorbed in 1923 by the Missouri–Kansas–Texas Railroad. The remaining 77-mile (124 km) link between Wichita Falls and Altus was absorbed in 1991 by the Wichita, Tillman and Jackson Railway.

By January 1902, Elk City had more than sixty businesses and a population exceeding 1,000. Paving the streets with bricks also began in 1902. Though not yet a year old, the town had become one of the largest in western Oklahoma. Even with two devastating fires (one on October 28, 1903, which destroyed more than a dozen businesses, and the other in March 1906 which burned sixteen businesses to the ground), Elk City continued to grow into a major transportation and commercial hub, and by statehood in 1907, the population had more than tripled to 3,000 people. The prairie community had become a boomtown.

Today, Elk City is the principal center of trade for Western Oklahoma and part of the Texas Panhandle, with a 60-mile (97 km) trade radius that serves more than 50,000 people. Petroleum, agriculture, wind energy, transportation, tourism, manufacturing, and healthcare all contribute to Elk City's economy.

Since the 2000 census, Elk City has had a nearly 3% growth in jobs. Over the next decade, the number of jobs available in Elk City is expected to skyrocket by about 42%.

Since Elk City lies in a rich oil and natural-gas area on the shelf of Oklahoma's Anadarko Basin, the petroleum industry is the heart of the city's economy. Because of this, the city is the self-proclaimed "Natural Gas Capital of the World", complete with Parker Drilling Rig #114, located downtown. The rig dominates the Elk City skyline, and at 180 feet (55 m) in height, is the world's tallest, non-operating oil rig. Elk City has enjoyed significant growth due to the opening and location of oil field services and drilling companies in the city.

Agriculture doesn't play as prominent of a role as it did in the 20th century, with the only remaining viable agricultural market being the livestock auction. Nevertheless, Elk City still serves as a vital retail center for farmers and ranchers in the area.

Transportation has played an important part in Elk City's economy throughout its history, beginning with the building of the famed U.S. Route 66 through the heart of the city in the early 1930s. Today, Interstate 40 serves the city, with 60,000 consumers traveling through Elk City each day, and connects with Oklahoma City to the east and Amarillo, Texas, to the west. The city is also served by Oklahoma State Highway 6, which connects Elk City with Altus to the south, and Oklahoma State Highway 34, connecting Elk City with Woodward to the north. The Elk City Regional Business Airport is located in the northeast part of the city, 1.5 miles (2.4 km) from the Interstate.

Given that Historic U.S. Route 66 runs through Elk City, a sprawling museum complex has developed, which includes the National Route 66 Museum, the Old Town Museum, the Transportation Museum, the Farm and Ranch Museum, and the Blacksmith Museum. Each museum is housed in separate buildings, which altogether depict a mockup of early Elk City, complete with general stores, bank, a railroad depot and train caboose, opera house, and other buildings. Elk City is also in close proximity to many other attractions in Western Oklahoma, including Foss State Park, Foss Reservoir, the Washita National Wildlife Refuge, Black Kettle National Grassland, the Wichita Mountains, the Antelope Hills, the Quartz Mountains, and the Washita Battlefield National Historic Site.

Great Plains Regional Medical Center is Elk City's largest employer and serves Western Oklahoma and the eastern Texas Panhandle. The hospital has been named by OKCBusiness and Best Companies Group as one of the "Thirty Best Places to Work in Oklahoma" for three consecutive years: 2006, 2007, and 2008. On May 11, 2007, construction began on a new, $60 million, 151,030-square-foot (14,031 m2) hospital that opened in July 2009.

In June 2009, it was announced that a Walmart Supercenter would be constructed, bringing at least 150 jobs to the city. Soon afterward, a $2.2 million federal grant was provided through the American Recovery and Reinvestment Act of 2009 to help fund the project and bring more jobs to Elk City. It opened in October 2010 off I-40 at Exit 40. Featuring 180,000-square-foot (17,000 m2) area, it is the largest store between Amarillo and Oklahoma City.

Elk City Public Schools and Merritt Public Schools are members of the Western Technology Center District. WTC provides the opportunity for adults and high school students to get occupationally-specific training. As a member of the WTC district, high school juniors and seniors living in the Elk City School District and Merritt School District have the opportunity to attend classes at WTC. High school students who are residents of the WTC District can enroll in WTC full-time training on a tuition-free basis. Adult students are allowed to attend classes on a tuition basis. Tuition for adult students is $2.00 per training hour. Adult students can apply for financial assistance to attend WTC.

All content from Kiddle encyclopedia articles (including the article images and facts) can be freely used under Attribution-ShareAlike license, unless stated otherwise. Cite this article:
Elk City, Oklahoma Facts for Kids. Kiddle Encyclopedia.