Weatherford is a city in Custer County, Oklahoma, United States. The population was 10,833 at the 2010 census.

Situated on land made available to homesteaders as part of the Cheyenne-Arapaho Opening on April 19, 1892, Weatherford was incorporated on August 3, 1898, on a townsite location chosen by banking and civic leader Beeks Erick. By 1900, the town's population was 1,017. The town's original post office was located approximately two miles north of town, on William John and Lorinda Powell Weatherford's homestead. Lorinda Weatherford served as its postmaster and namesake. In its early years, farming and ranching provided the major economic base, with corn, cotton, and maize the major crops. Additionally, a brick plant, a cement plant, and a broom factory provided jobs as well as supplies for early residents.

There were 3,991 households out of which 25.8% had children under the age of 18 living with them, 42.5% were married couples living together, 9.0% had a female householder with no husband present, and 45.2% were non-families. 31.6% of all households were made up of individuals and 8.3% had someone living alone who was 65 years of age or older. The average household size was 2.27 and the average family size was 2.96. 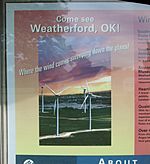 Weatherford is home to the second-largest (as of 2008) wind farm in Oklahoma, the Weatherford Wind Energy Center, with 98 GE 1.5 MW Wind Turbines, for a total nameplate capacity of 147 MW.

Weatherford was for many years on a main line of the now defunct Rock Island Railroad, which is still in operation by a different owner. With the advent of the automobile, the city was initially located on State Highway 3 starting in the early 1920s, which was redesignated as U.S. Route 66 in 1926 and paved entirely across Western Oklahoma by 1932. Route 66, which followed Main Street through the city, was lined with various tourist businesses including cafes, motels and gasoline stations like most other cities along the highway. Several blocks of Main Street were also paved in brick until the mid-1950s when it was widened to a four-lane thoroughfare. Interstate 40 was completed east and west of the city in 1960 generally paralleling the old U.S. 66 alignment, which was retained as frontage road. The I-40 bypass skirting Weatherford to the south was completed in July, 1970 the same day the I-40 bypass was opened to traffic 15 miles (24 km) to the west at Clinton and followed shortly thereafter by bypasses at Elk City and Sayre. In addition to Route 66 and I-40, Weatheford is also served by north-south State Highway 54.fr:Weatherford

All content from Kiddle encyclopedia articles (including the article images and facts) can be freely used under Attribution-ShareAlike license, unless stated otherwise. Cite this article:
Weatherford, Oklahoma Facts for Kids. Kiddle Encyclopedia.