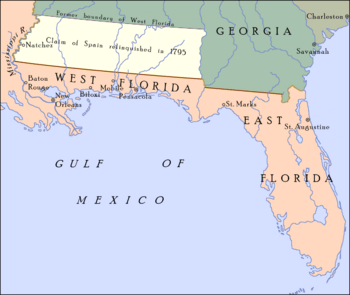 The boundary between the United States and Spanish Florida as set by "Pinckney's Treaty" (effective August 3, 1796) at 31°N, and Spain relinquished its claim on all territory north from that line to 32° 22′ to the United States.

All content from Kiddle encyclopedia articles (including the article images and facts) can be freely used under Attribution-ShareAlike license, unless stated otherwise. Cite this article:
Pinckney's Treaty Facts for Kids. Kiddle Encyclopedia.