Mobile County ( moh-BEEL) is located in the southwestern corner of the U.S. state of Alabama. It is the second most-populous county in the state after Jefferson County. As of the 2020 census, its population was 414,809. Its county seat is Mobile, which was founded as a deepwater port on the Mobile River. The only such port in Alabama, it has long been integral to the economy for providing access to inland waterways as well as the Gulf of Mexico.

The city, river, and county were named in honor of Maubila, a village of the paramount chief Tuskaloosa of the regional Mississippian culture. In 1540 he arranged an ambush of soldiers of Hernando de Soto's expedition in an effort to expel them from the territory. The Spaniards were armed with guns and killed many of the tribe. Mobile County and Washington County, Alabama make up the Mobile Metropolitan Statistical Area with a 2020 population of 430,197. The Mobile, AL MSA and Daphne-Fairhope-Foley, AL MSA make up the much larger Mobile-Daphne-Fairhope CSA with a 2020 population of 661,964.

The northern border of Mobile County and southern area of neighboring Washington County constitute the homeland of the state-recognized tribe of MOWA Band of Choctaw Indians, descendants of Choctaw and Creek who stayed in this area during the period of Indian Removal. They have organized to preserve their culture and language. They were the first of nine tribes to be recognized by the state.

This area was occupied for thousands of years by varying cultures of indigenous peoples. The historic Choctaw had occupied this area along what became called the Mobile River when encountered by early French traders and colonists, who founded Mobile in the early eighteenth century. The British took over the territory in 1763 (along with other French territories east of the Mississippi River) after defeating the French in the Seven Years' War. During the American Revolutionary War, it came under Spanish rule as part of Spanish Florida. Spain ceded the territory to the United States after the War of 1812.

In the 1830s, the United States forced the removal of most of the Native Americans in the area under President Andrew Jackson's policy to relocate them to Indian Territory west of the Mississippi River. Many of those who remained continued their culture; since the late 20th century, several tribes have reorganized and gained state recognition. Among those is the MOWA Band of Choctaw Indians, which was recognized as a tribe in 1979 by the state, but not federally; it occupies land along the border of Mobile and Washington counties.

After more than a century of European settlement, Mobile County was organized by the legislature and the proclamation of Governor Holmes of the Mississippi Territory on December 18, 1812. When Mississippi was separated and admitted as a state on December 10, 1817, after adopting its constitution on August 15, 1817, Mobile County became part of what was called the Alabama Territory. Two years later, the county became part of the state of Alabama, granted statehood on December 14, 1819.

The city of Mobile, first settled by French colonists in the early 18th century as part of La Louisiane, was designated as the county seat from the early days of the county. Both the county and city derive their name from Fort Louis de la Mobile, a French fortification established (near present-day Axis, Alabama) in 1702. The word "Mobile" is believed to stem from a Choctaw Indian word for "paddlers". The area was occupied by French colonists from 1702–1763, whose influence was strong in the city. It was ruled by the British from 1763–1780, when more American colonists began to enter the territory; and controlled by the Spanish from 1780-1813.

At the end of the War of 1812, the United States took over the territory. At that time, new settlers were being attracted to the land, eager to develop short-staple cotton in the uplands area. Invention of the cotton gin made processing of this type of cotton profitable, stimulating wholesale development of new cotton plantations in the Black Belt during the antebellum years. Mobile developed as a major port for export of cotton. 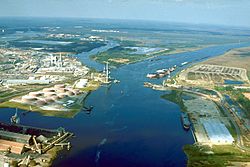 Aerial view of the Mobile River at its confluence with Chickasaw Creek. This photograph was taken around 1990 during construction of the Cochrane-Africatown bridge carrying U.S. Route 90 across the river.

According to the 2010 United States Census, the population of the county comprised the following racial and ethnic groups:

Mobile County is the home of the University of South Alabama (USA), a public research university divided into ten colleges, including one of Alabama's two state-supported medical schools. USA has an enrollment of over 16,000 students and employs more than 6,000 faculty, administrators, and support staff. It is also home to two private institutions of higher learning. Spring Hill College, founded in 1830, is Catholic and the third-oldest Jesuit college or university in the U.S. Its enrollment is about 1,500 students and it offers 46 academic majors. University of Mobile, established in 1961 and affiliated with Alabama Baptist Convention, has an enrollment of about 2,000 and offers 90 academic majors.

All content from Kiddle encyclopedia articles (including the article images and facts) can be freely used under Attribution-ShareAlike license, unless stated otherwise. Cite this article:
Mobile County, Alabama Facts for Kids. Kiddle Encyclopedia.