Dauphin Island is a town in Mobile County, Alabama, United States, on a barrier island of the same name (split by the Katrina Cut), in the Gulf of Mexico. It incorporated in 1988. The population was 1,778 at the 2020 census, up from 1,238 at the 2010 census. The town is part of the Mobile metropolitan area. The island (originally named Massacre Island) was renamed for Louis XIV of France's great-grandson and heir, the dauphin, the future Louis XV of France. The name of the island is often mistaken as Dolphin Island; the word dauphin is French for dolphin, but historically, the term was used as the title of the heir apparent to the French monarch.

Dauphin Island is home to Fort Gaines, Dauphin Island Sea Lab, The Estuarium public aquarium, the Dauphin Island Airport, boat ramps, a large public pier that sits on dry land, historic sites, several restaurants, new condominium developments, and numerous private homes. Beaches attract tourism, and fishing is a popular activity in the waters around the island. The island is connected to the mainland by the Gordon Persons Bridge.

Although the island has several bird sanctuaries, the main one is the 164-acre (66 ha) Audubon Bird Sanctuary. Because Dauphin Island is the first land encountered by many birds as they migrate north from South America, many species can be found resting there before continuing their journey.

In May 2012, the central public beach began charging for access. This marked the second beach on the island to charge the public following the creation of the privately owned West End Beach. 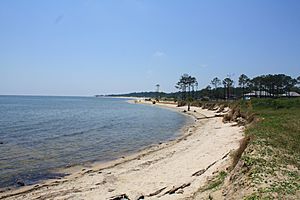 View of the southeastern shore of the island.

In 1519, the Spanish explorer Alonso Álvarez de Pineda was the first documented European to visit, staying long enough to map the island with remarkable accuracy.

The island's French history began on January 31, 1699, when the explorer Pierre Le Moyne, sieur d'Iberville, one of the founders of French Louisiana, arrived at Mobile Bay, and anchored near the island on his way to explore the mouth of the Mississippi River. D'Iberville named it "Isle Du Massacre" (Massacre Island) because of a large pile of human skeletons discovered there. The gruesome site turned out to be a simple burial mound which had been broken open by a hurricane, not a massacre site, but the name stuck.

D'Iberville later decided to locate a port for Fort Louis de La Louisiane on the island due to abundant timber, reliable supply of fresh water, and a deep-water harbor. The settlement consisted of a fort, a chapel, government-owned warehouses, and residences. 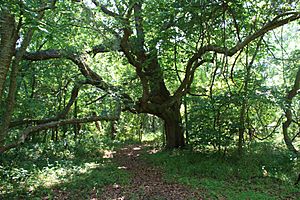 The island served as a major trading depot, unloading goods from Saint-Domingue (Haiti), Mexico, Cuba and France, and collecting furs in a short-lived fur trade. Mobile Bay itself, before a channel was dredged, was too shallow, and its sand bars too shifting and treacherous, for ocean-going vessels to travel up the bay and Mobile River to Fort Louis de La Louisiane. So, smaller boats carried cargo within Mobile Bay to Dauphin Island.

Fort Gaines on the eastern tip of the island was built between 1821 and 1848. It was occupied by Confederate forces in 1861, and captured by Federal troops during the Battle of Mobile Bay. The phrase, "Damn the torpedoes, full speed ahead," was spoken by U. S. Admiral David Farragut just a few hundred yards from Dauphin Island's shore. 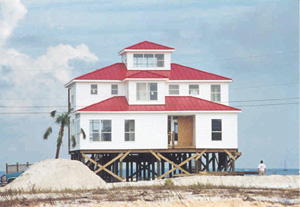 The first Sand Island Light, authorized in 1834, was replaced by a structure 150 feet (46 m) high, at a cost of $35,000, that was dynamited by Confederate forces. The present lighthouse (1873; in use until 1970), has been placed on the National Register of Historic Places. Its ownership was recently transferred from the Department of Interior to the Town of Dauphin Island.

There were 582 households, out of which 13.2% had children under the age of 18 living with them, 57.2% were married couples living together, 4.3% had a female householder with no husband present, and 35.9% were non-families. 28.4% of all households were made up of individuals, and 9.8% had someone living alone who was 65 years of age or older. The average household size was 2.10 and the average family size was 2.55.

On the top is the historic Ft Gaines with two cannons (one facing North and one facing South) which represents Dauphin Island's part in America's Civil War of the 1860s. The boat is a shrimping vessel which represents the livelihood of many of the residents of the island and the Dolphin is a mammal seen quite often in the Gulf of Mexico and Mobile bay waters surrounding the Island. The birds are Pelicans which are numerous around the island and the entire Gulf coast. The Fleur de Lis represents France (1699–1764). The sailing ship is a Spanish Galleon (1781–1813). Both countries were very influential in settling the area.

Over the centuries, many hurricanes have struck the island. Some recent storms include:

The approach road to the island fared better than expected. The damage to most East End beach front homes was limited to decks, stairs and storage buildings. In DeSoto Landing, a gated gulf-front subdivision on Dauphin Island, the main homes had no water entering the homes unless a window or roof system failed; many avoided surge waters entirely. Damage was limited due to Sand Island (Pelican Island), a large sandbar south of DeSoto Landing which broke the force of battering waves.

An oil drilling platform grounded near the island as the hurricane passed by. It was identified by its owners, Diamond Offshore Drilling Inc., as the Ocean Warwick, pushed nearly 60 miles (97 km) from its original location by the hurricane.

The old walled Fort Gaines is on the east end of Dauphin Island. A ferry from nearby Fort Morgan in Gulf Shores brings both vehicles and pedestrians to the island. One of the closest attractions to the ferry dock is The Estuarium, a fresh- and saltwater aquarium highlighting species native to Alabama.

The Dauphin Island Sea Lab is located on the east end of the island on grounds formerly occupied by the 693rd Radar Squadron, Dauphin Island Air Force Station, US Air Force, and is home to the Marine Environmental Sciences Consortium.

All content from Kiddle encyclopedia articles (including the article images and facts) can be freely used under Attribution-ShareAlike license, unless stated otherwise. Cite this article:
Dauphin Island, Alabama Facts for Kids. Kiddle Encyclopedia.