Hurricane Elena was a category 3 major hurricane that caused heavy damage along the Gulf Coast of the United States in August and September of the 1985 Atlantic hurricane season.

Elena's unusual path through the Gulf of Mexico, which included a loop, caused many people to evacuate from the coastline. 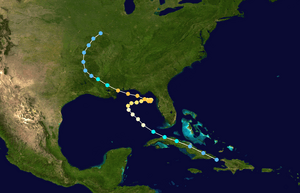 Before Hurricane Elena, there was a tropical wave that moved off the coast of Africa on August 23. It remained weak due to its fast westward motion and Saharan Air Layer around the circulation. As it moved through the Greater Antilles, it slowed and a tropical depression formed on August 28 between Cuba and Haiti. It paralleled the northern cost of Cuba, and became Tropical Storm Elena that night. Conditions were good for the storm to develop in the Gulf of Mexico, and Elena became a hurricane on the 29th.

All content from Kiddle encyclopedia articles (including the article images and facts) can be freely used under Attribution-ShareAlike license, unless stated otherwise. Cite this article:
Hurricane Elena Facts for Kids. Kiddle Encyclopedia.