The Dauphin Island Sea Lab (DISL) is Alabama's primary marine education and research center. DISL is the home site of the Marine Environmental Sciences Consortium and was founded by an act of the Alabama State Legislature in 1971. It also has a public aquarium specializing in estuarine organisms, the George F. Crozier Estuarium.

The facilities are located on the East end of Dauphin Island, and occupy grounds formerly owned by the US Air Force for the 693rd Radar Squadron. It is located across the street from historic Fort Gaines. 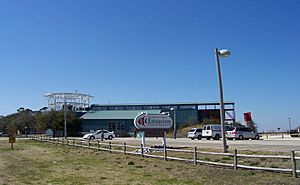 The George F. Crozier Estuarium is part of the Discovery Hall educational program at the Dauphin Island Sea Lab. It includes a 10,000 square foot Exhibit Hall and a Living Marsh Boardwalk. The Exhibit Hall features four exhibits highlighting aquatic life that could be found in the Mobile-Tensaw River Delta, Mobile Bay, the Barrier Islands and the Northern Gulf of Mexico.

It was announced in August 2014 that the Dauphin Island Sea Lab would open a new 2,300 square feet (210 m2) research facility in mid-2015 dedicated to studying dolphin, manatee and whale strandings on the Alabama Gulf Coast. The Alabama Marine Mammal Stranding Network (AMMSN) took residence in the new facility on May 22, 2015.

All content from Kiddle encyclopedia articles (including the article images and facts) can be freely used under Attribution-ShareAlike license, unless stated otherwise. Cite this article:
Dauphin Island Sea Lab Facts for Kids. Kiddle Encyclopedia.