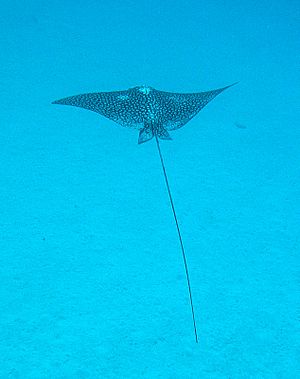 This spotted eagle ray is using its pectoral fins to fly through the water.

The rays are a group of Batoid cartilaginous fish containing more than 500 described species in thirteen families. The batoids include four orders.

They are mostly flattened in shape, and usually demersal, living and eating at the bottom of the sea. The group first appears in the Triassic period, after 95% of marine species had been wiped out by the P/Tr extinction event.

Rays look like bats in the water, and this is probably why they are called batoids. They have pectoral fins that are attached to their bodies from back to front, similar to the way a bat's wings attach from its shoulder to its feet.

The fins of the ray create a disk shape that can be round, triangular, or diamond-shaped. Rays use their pectoral fins to 'fly' through the water. Though a bony fish takes in water with its mouth, rays do not because they live at the bottom of the ocean. If they took in water through their mouths, they would probably just get a mouthful of sand. Because of this, they have breathing holes on top of their bodies called spiracles. Rays use spiracles to take in water that is then sent over the gills.

Also, because they do not have a swim bladder, rays sink when they are not actively swimming.

Interestingly, rays are usually curious and social animals. Though they often live alone, they like swimming together in groups with other rays. Despite the fact that they are able to swim, most rays live at the bottom of the sea, eating benthic animals. In fact, they often flick sand on their backs to camouflage (disguise, or hide) themselves as they lie in the sand at the bottom of the ocean.

All content from Kiddle encyclopedia articles (including the article images and facts) can be freely used under Attribution-ShareAlike license, unless stated otherwise. Cite this article:
Ray Facts for Kids. Kiddle Encyclopedia.