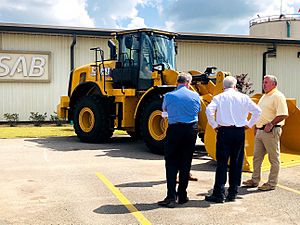 Axis is an unincorporated community and census-designated place in Mobile County, Alabama, United States. It has a post office with the 36505 ZIP code. The community has one site listed on the Alabama Register of Landmarks and Heritage, the Kirk House.

Prior to the split of Satsuma from the Mobile County system, Axis was zoned to Satsuma High School. In 2011 Renee Busbee of the Mobile Press-Register said that residents of Axis may be rezoned to Blount, Citronelle, and/or Vigor high schools.

All content from Kiddle encyclopedia articles (including the article images and facts) can be freely used under Attribution-ShareAlike license, unless stated otherwise. Cite this article:
Axis, Alabama Facts for Kids. Kiddle Encyclopedia.