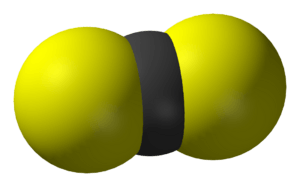 Carbon disulfide, also known as carbon bisulfide, is a chemical compound. It consists of carbon and sulfide ions. It contains carbon in its +4 oxidation state and sulfur in its -2 oxidation state. Its chemical formula is CS2.

It is similar to carbon dioxide, although much more reactive. Sulfide is a much more powerful reducing agent than oxide. It burns very easily and catches fire at 90°C. It smells sweet but is often contaminated other chemicals that smell bad.

It used to be made by reacting carbon and sulfur at a very high temperature. Now it is made by "burning" methane in sulfur (instead of oxygen). It is much harder to burn methane in sulfur. The waste product (carbon disulfide) is also much more reactive than carbon dioxide, the normal waste product.

It is used to make carbon tetrachloride. It is also used in making organic chemicals. It is used to dissolve things like phosphorus and iodine and to kill insects.

Carbon disulfide is very flammable and is also toxic in large amounts when breathed in.

All content from Kiddle encyclopedia articles (including the article images and facts) can be freely used under Attribution-ShareAlike license, unless stated otherwise. Cite this article:
Carbon disulfide Facts for Kids. Kiddle Encyclopedia.