Bon Secour National Wildlife Refuge is a 7,157-acre (29 km2) National Wildlife Refuge located in five separate units in Baldwin and Mobile Counties, United States, directly west of Gulf Shores, Alabama on the Fort Morgan Peninsula. The refuge serves as a resting and feeding area for migratory birds and as a sanctuary for native flora and fauna. The refuge is one of the largest undeveloped parcels of land on the Alabama coast.

Established in 1980, Bon Secour (the name, in French, means "safe harbor") is smaller than most other national wildlife refuges, and is divided into Sand Bayou, Perdue, Little Point Clear, Fort Morgan, and Little Dauphin Island.

The Perdue unit is the most developed. Most units are located on the Fort Morgan Peninsula in Baldwin County, except Little Dauphin Island, which is in Mobile County. More than 50,000 guests visit the refuge annually. The fiscal year 2005 budget was $404,000. 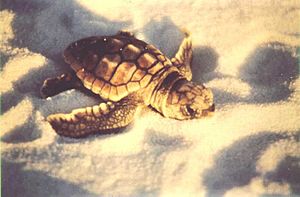 The refuge seeks to conserve an undisturbed beach and dune ecosystem which will serve as a refuge for endangered and threatened plant, fish, and wildlife species, as well as a habitat for migratory birds.

Some of the refuge's endangered species are the Alabama beach mouse which lives among the sand dunes and sea oats, and green, loggerhead, and Kemp's ridley sea turtles, which nest along the beach.

Approximately 400 species of birds have been identified on the refuge, usually during migratory seasons, ranging from ospreys and herons to seven species of hummingbirds. There have been sightings of deer, bobcat, alligators, red fox, wild pig, coyotes, and armadillos.

There are four trails in the Perdue unit of the refuge with a combined length of five miles.

All content from Kiddle encyclopedia articles (including the article images and facts) can be freely used under Attribution-ShareAlike license, unless stated otherwise. Cite this article:
Bon Secour National Wildlife Refuge Facts for Kids. Kiddle Encyclopedia.