Gulf Shores is a resort city in Baldwin County, Alabama, United States. As of the 2010 Census, the population was 9,741. 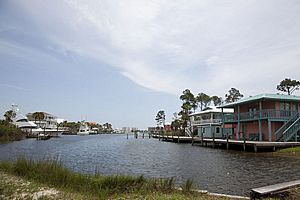 There were 2,344 households out of which 20.7% had children under the age of 18 living with them, 56.2% were married couples living together, 7.0% had a female householder with no husband present, and 34.1% were non-families. 26.7% of all households were made up of individuals and 10.0% had someone living alone who was 65 years of age or older. The average household size was 2.15 and the average family size was 2.56.

Since the year 2000, Baldwin County as a whole has experienced rapid population growth, second only to Shelby County in Alabama.

Like many coastal communities, tourism plays a major role in the local economy of Gulf Shores. The 2010 BP oil spill was expected to severely affect both local real estate and beach tourism. However, after a rough year, the tourism economy in Gulf Shores appears to have returned to pre-spill levels. In October 2011, the city began a branding campaign to help it stand out from other coastal destinations in the area.

Ocean fishing, beaches, boating cruises, and especially golf are major draws for the area. Chartered fishing boats and cruise boats for sunsets, dinner cruises, dolphin watching, and watersports embark regularly, and the area is home to two of the top-rated golf resorts in the Alabama - Craft Farms and Kiva Dunes. There are a total of nine signature golf clubs, as well as a state-owned 18-hole course. Other popular attractions include the Alabama Gulf Coast Zoo (as featured in Animal Planet's "The Little Zoo that Could"); Pelican Place at Craft Farms, a shopping mall; and Waterville USA, a family amusement/waterpark. The city is home to an annual three-day music festival on the beach each May, the Hangout Music Festival.

The Hangout owner Shaul Zislin has been criticized for overselling and marketing practices which have attracted undesirable tourists and caused overcrowding, traffic jams and overburdening of the cities police, EMS and waste disposal resources as well as noise pollution on what was once a quiet family oriented beach resort area. The public address system can often be heard over 2 miles away in the Gulf State Park.
Many Alabama residents have opposed the building of a new hotel on state property and the use of BP Oil spill funds to finance projects other than environmental repair. In 2016 the State of Alabama elected to close a road on State Park property with out any notice or warning. it is now used as a bicycle and hiking trail.

Gulf Shores was referenced in passing the first episode of True Detective.

All content from Kiddle encyclopedia articles (including the article images and facts) can be freely used under Attribution-ShareAlike license, unless stated otherwise. Cite this article:
Gulf Shores, Alabama Facts for Kids. Kiddle Encyclopedia.