Baldwin County is a county of the U.S. state of Alabama. According to the 2015 estimates from the U.S. Census Bureau, the population is approximately 203,709. The county seat is Bay Minette. The county is named in honor of Senator Abraham Baldwin, though he never lived in what is now Alabama.

It is the largest county in Alabama by area and is located on the eastern side of Mobile Bay.

Baldwin County was established on December 21, 1809, ten years before Alabama became a state. Previously, the county had been a part of the Mississippi Territory until 1817, when the area was included in the separate Alabama Territory. Statehood was gained by Alabama in 1819.

There have been numerous border changes to the county as population grew and other counties were formed. Numerous armies have invaded during the Revolutionary War, War of 1812, and Civil War.

To achieve the relocation, the men of Bay Minette devised a scheme. They fabricated a murder to lure the Sheriff and his deputy out of the Daphne. While the law was chasing down the fictitious killer during the late hours, the group of Bay Minette men stealthily traveled the seventeen miles (27 km) to Daphne, stole the Baldwin County Courthouse records, and delivered them to the city of Bay Minette, where Baldwin County's county seat remains. A New Deal mural, completed by WPA artists during the Great Depression, depicts the events. It hangs in the Bay Minette United States post office .

Two separate areas in Baldwin County have been designated as "Outstanding Alabama Water" by the Alabama Environmental Management Commission, which oversees the Alabama Department of Environmental Management. As of April 2007, only two other areas in Alabama have received what is the "highest environmental status" in the state. A portion of Wolf Bay and 42 miles (68 km) of the Tensaw River in northern Baldwin County have received the designation. Officials believe the "pristine water" will become an important eco-tourism destination.

There are numerous private airports and heliports in Baldwin County. Considerable military airspace overlies much of the county and adjacent bay and coastal waters.

Whereas according to the 2010 United States Census Bureau: 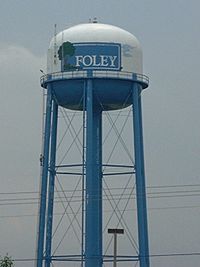 The water tower in central Foley

Perdido County, Alabama would contain northern Baldwin County, divided by a straight line extending westward from the northwestern tip of Florida, and western Escambia County, west of Big Escambia Creek. (The Flomaton area is excluded via a prominent power line easement, from Big Escambia Creek to the Florida state line.) The headwaters of the Perdido River rise near the center of this proposed county. The Perdido County seat would be Atmore. The county has been proposed by city of Atmore backers, who believe that their growing city of over 10,000 residents should be a county seat. Furthermore, county backers believe that Atmore belongs in the Mobile-Daphne-Fairhope metropolitan combined statistical area, which would become much more likely within its own exurban-leaning county. Brewton would remain the county seat of rural-leaning Escambia County. In addition to the incorporated city of Atmore, Perdido County would include the unincorporated communities of Blacksher, Canoe, Freemanville, Huxford, Nokomis, Perdido and Tensaw.

All content from Kiddle encyclopedia articles (including the article images and facts) can be freely used under Attribution-ShareAlike license, unless stated otherwise. Cite this article:
Baldwin County, Alabama Facts for Kids. Kiddle Encyclopedia.