Spanish Fort is a city in Baldwin County, Alabama, United States, located on the eastern shore of Mobile Bay. The 2020 census lists the population of the city as 10,049. It is a suburb of Mobile and is part of the Daphne-Fairhope-Foley micropolitan area.

The 2020 Census calculated a population in Spanish Fort, Alabama as 10,049. With a 47.8% increase in population from the 2010 census, Spanish Fort is now the 2nd fastest growing city in the state of Alabama, right behind Gulf Shores, Alabama.

The city of Spanish Fort is rich in history dating as far back as 1712 with the founding of Mobile by Jean-Baptiste Le Moyne de Bienville of France. Spanish Fort was originally the site of a trading post established by French-occupied Mobile. Following the French and Indian War, a large area on the Gulf Coast including the trading post was ceded to the British in 1763. During the Revolutionary War after the Spanish took Mobile and surrounding areas in the Battle of Fort Charlotte, a presidio or military fort was built on the site of the old trading post. This "Spanish Fort" was the site of a counterattack by British forces dispatched from Pensacola in 1781. The British were driven back and unsuccessful in recapturing the area. Following the War of 1812, Spanish Fort, as it was now commonly referred to, was officially property of the United States.

During the American Civil War, Spanish Fort was heavily fortified as an eastern defense to the city of Mobile. Fort Huger, Fort (Battery) Tracey, Fort (Battery) McDermott, Fort Alexis, Red Fort, and Old Spanish Fort were all part of the Mobile defenses in what is now Spanish Fort. After the Union victory in the Battle of Mobile Bay, Mobile nevertheless remained in Confederate hands. Union forces embarked on a land campaign in early 1865 to take Mobile from the east. Spanish Fort was the site of the Battle of Spanish Fort in the Mobile Campaign of the war. Its fall allowed Union forces to concentrate on Fort Blakeley to the north, and hence destroy the last organized resistance east of the Mississippi River. The falls of Spanish Fort and Fort Blakeley permitted Union troops to subsequently enter Mobile unopposed after the conclusion of the Civil War.

Spanish Fort is a part of the Baldwin County Public Schools system under direction of Superintendent Eddie Tyler. Two elementary schools, a middle school, and a high school serve Spanish Fort. Both the elementary school and high school have had substantial building additions in recent years as the enrollment numbers rise. Baldwin County Public Schools was approved by the County Commission to establish a four-year, $60 million loan to fund the new additions across the county. 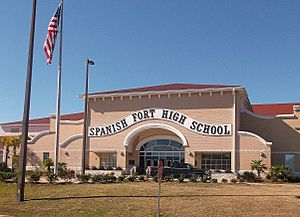 All content from Kiddle encyclopedia articles (including the article images and facts) can be freely used under Attribution-ShareAlike license, unless stated otherwise. Cite this article:
Spanish Fort, Alabama Facts for Kids. Kiddle Encyclopedia.