The inhabited history of what is now called Daphne dates at least to the Paleo-Indian period and Native American tribes around 9000 BC. Modern-day Daphne is a thriving suburb of nearby Mobile. Daphne has adopted the nickname ″The Jubilee City″ in recognition of its status as one of the locations of the Mobile Bay jubilee.

Daphne and the surrounding regions have been populated since from at least 9,000 BCE. European settlers eventually displaced the Native Americans. After a variety of wars and treaties the area became part of the United States in 1814. Except for a period under the flag of the Confederate States of America, Daphne and its environs have remained part of the United States until this time. From Native American, to the Spanish, French and British, the city has seen a lengthy parade of historic influences which gives Daphne its present character.

Early settlers to the region were hunter-gatherer tribes similar to those in North Alabama. A variety of Native American populations visited the area that would become Daphne including Tensaw, Choctaw, Creek and Seminole. This area came to be known as neutral ground where tribes would meet and discuss the relationships between their nations. Small groups worked together to acquire food and to provide for their families. Initially, these groups enjoyed an economy based upon hunting and scavenging but as time passed production of weapons and pottery became more advanced. During the late Woodland stage Native Americans began to practice more elaborate ritual services. Although no burial grounds are known in Daphne, they are scattered throughout nearby Baldwin County.

By 1500, the zenith of Native American culture in South Alabama, it is estimated that a community of about 5,000 lived within 50 miles of the seacoast. These peoples were among the first who met Spanish explorer Hernando de Soto in 1540. From this meeting forward, the original settlers faced a disaster from which they did not recover.

The Spanish were the first European settlers to the area of Daphne arriving in 1557. Spanish control in the area was weak and in 1710 French explorers claimed Mobile Bay, the Eastern Shore of the Bay including Daphne, and land east to Perdido Bay. The French claim was largely uncontested by the Spanish. In 1763 The British were ceded land, including the future Daphne, from French in the Treaty of Paris (1763). The community of Daphne was established the same year and was known simply as the Village. Inasmuch as the British occupied nearby Mobile at the end of the Seven Years' War, Daphne passed into British hands, and served as the eastern terminal of a ferry across Mobile Bay.

British rule ended in 1783 when the area was surrendered to Spain by the Treaty of Paris (1783). The area remained under Spanish control for over 30 years. In November, 1814, U.S. General Andrew Jackson crossed the bay with 3,000 troops, marched east to Pensacola and defeated the British thus finalizing American control over Daphne.

Secession and the Civil War came quickly following the election of 1860. Statistics are not available for Daphne, but in Baldwin County 65% of homes held at least one slave. On January 11, 1861 Alabama seceded from the Union. It joined the Confederate States of America on March 13, 1861. The town was named the county seat of Baldwin County, Alabama, in 1868 after the previous county seat, Blakeley, was deserted following the Civil War. At that time, Daphne was known as The Village of Bell Rose. Daphne was officially named and established, although unincorporated, on April 9, 1874 when the Post Office for Daphne was opened.

Baldwin County saw many distinct immigrant groups moving into the area in the late 19th century, particularly from Western Europe, and Daphne was the site of the first group which arrived in 1888. Alesandro Mastro Valero purchased land in Daphne to locate a refuge for Italian immigrants looking for a more pastoral alternative to the large urban cities of the north. In June, 1895, land was purchased in Daphne for a Catholic church in what is now the center of Old Daphne to be built by the early Italian colonists. Father Angelo Chiariglione, a Scalbrini missionary from Torino, Italy, was the first resident pastor (1898-1909) of the church, known as the Church of the Assumption. This small-town church quickly gained the recognition of the Queen of Italy, Margherita of Savoy, who in 1898 sent a gift of rich vestments, an illuminated missal, a chalice, monstrance, candlesticks and other articles, and all are still on display in the present Christ the King Catholic Church, the cornerstone of which was laid in 1937.

Daphne remained the county seat until a legislative act of 1900, when the county seat was moved to Bay Minette. Daphne residents resisted the change and would not allow the county records to be removed. Those records were taken in a late night raid and moved to Bay Minette. According to another account, given in 1956 in an interview of one of the persons involved in the transfer, there was no raid; the arrangements for the move were made in advance between officials in both towns, and the county records were quietly loaded into wagons over a five-hour period on the evening of October 11, 1901, and then driven to Bay Minette the next day.

On July 8, 1927, Daphne was incorporated with a request for incorporation signed by 41 landowners. The initial population was listed as 500 residents. On September 19, 1927, the town held its first election. The first Mayor was James M. Voltz. An attempt in 1946 to revoke incorporation by unhappy residents failed.

In July, 1997 Hurricane Danny struck the gulf coast bringing high winds and rains to the area. Due to the abnormal development of the storm, winds blew water out of Mobile Bay making it almost possible to walk across the bay. Hurricane Ivan made landfall in September, 2004, south of Daphne near Gulf Shores, Alabama. The category 3 storm brought widespread flooding and damage throughout Daphne. The next year, Daphne weathered some effects of Hurricane Katrina although not nearly as severe as the 2004 storm.

In February, 2008, Daphne became the last of the large cities in Baldwin County to enact a public smoking ban. After contentious council meetings, the ban was passed while exempting bars, private clubs and up to 30% of rooms in a hotel.

In November 2010, the Daphne City Council enacted a ban against texting while driving, becoming the first Mobile-area municipality to do so.

The topography of Daphne is quite consistent from a gently sloping sea level on the west to low rolling hills further east. Generally, the entire city lies no more than 150 feet above sea level. The land along the Daphne bay coast, like other land throughout the county, is rich with sandy-loam type soils.

Daphne is also known as the "Jubilee City." A Jubilee in Mobile Bay occurs when crab, shrimp, and other sea life from the waters of Mobile Bay are suddenly found washed ashore along the coastline. Biologists believe the phenomenon is due to a possible decrease in water oxygen levels which force the fish to the surface.

There were 8,889 households out of which 28.8% had children under the age of 18 living with them, 52.5% were married couples living together, 10.4% had a female householder with no husband present, and 33.5% were non-families. 28.1% of all households were made up of individuals living alone and 9.3% had someone living alone who was 65 years of age or older. The average household size was 2.41 and the average family size was 2.97.

Daphne has six public parks, which include the following: 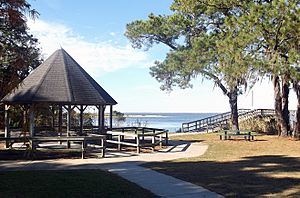 The Daphne Civic Center is a city-owned facility used to host a variety of recurring special events in the community. Constructed at a cost of $6 million, it opened to the public in December 1999. A senior citizens activity center and the Daphne Public Library are also located in the civic center complex.

All content from Kiddle encyclopedia articles (including the article images and facts) can be freely used under Attribution-ShareAlike license, unless stated otherwise. Cite this article:
Daphne, Alabama Facts for Kids. Kiddle Encyclopedia.