Fairhope is a city in Baldwin County, Alabama, United States, on a sloping plateau, along the cliffs and shoreline of Mobile Bay. The 2010 census lists the population of the city as 15,326. Fairhope is a principal city of the Daphne-Fairhope-Foley micropolitan area, which includes all of Baldwin County. In 2016, Fairhope was named the best small town in the South by Southern Living magazine.

Fairhope was founded in November 1894 on the site of the former Alabama City as a radical Georgist "Single-Tax" colony by the Fairhope Industrial Association, a group of 28 followers of economist Henry George who had incorporated earlier that year in Des Moines, Iowa. Their corporate constitution explained their purpose in founding a new colony:

"to establish and conduct a model community or colony, free from all forms of private monopoly, and to secure to its members therein equality of opportunity, the full reward of individual efforts, and the benefits of co-operation in matters of general concern."

In forming their demonstration project, they pooled their funds to purchase land at "Stapleton's pasture" on the eastern shore of Mobile Bay and then divided it into a number of long-term leaseholds. The corporation paid all governmental taxes from rents paid by the lessees, thus simulating a single-tax. The purpose of the single-tax colony was to eliminate disincentives for productive use of land and thereby retain the value of land for the community.

"Fairhope Avenue" was one of the properties on the 1910 version of the board game The Landlord's Game, a precursor of Monopoly.

In 1907 educator Marietta Johnson founded the School for Organic Education in Fairhope. The school was praised in John Dewey's influential 1915 book Schools of Tomorrow. Dewey and Johnson were founding members of the Progressive Education Association. 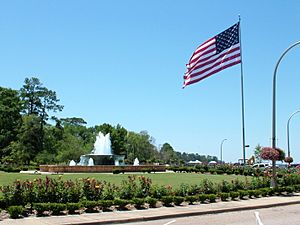 Fountain at the Municipal Pier

The Fairhope Single-Tax Corporation still operates, with 1,800 leaseholds covering more than 4,000 acres (16 km2) in and around the current city of Fairhope. Despite the ideals of the corporation, the town has transitioned from utopian experiment to artists' and intellectuals' colony to boutique resort and affluent suburb of Mobile.

For over 50 years, fishermen and residents of Fairhope have experienced the "jubilee" phenomenon. During a jubilee along the shores of Mobile Bay, some aquatic animals, including blue crabs, flounder, stingrays, and eels, come to the shallow water. At those times, it is possible to catch the fish, crabs, and other sea life near the water's edge.

The Weeks Bay Nature Reserve, located 10 miles (16 km) to the southeast, is known for the many oaks, wildlife and pitcher plants along the elevated walkways through the swamp forest.

The Bell Building on the Faulkner State Community College campus houses the Marietta Johnson Museum. The Fairhope Museum of History is located downtown.

Fairhope is located on the shore of Mobile Bay. It is located 6 miles (10 km) south of Daphne and 10 miles (16 km) south of Spanish Fort. U.S. Route 98 (Greeno Road) runs north-south through the city.

Fairhope has a humid subtropical climate. It experiences hot, humid summers and generally mild winters, with average high temperatures ranging from 90 °F (31.7 C) in the summer to 59 °F (15 C) high during winter.

There were 6,732 households out of which 25.9% had children under the age of 18 living with them, 53.6% were married couples living together, 9.1% had a female householder with no husband present, and 34.7% were non-families. 31.2% of all households were made up of individuals and 17.1% had someone living alone who was 65 years of age or older. The average household size was 2.26 and the average family size was 2.84.

All content from Kiddle encyclopedia articles (including the article images and facts) can be freely used under Attribution-ShareAlike license, unless stated otherwise. Cite this article:
Fairhope, Alabama Facts for Kids. Kiddle Encyclopedia.