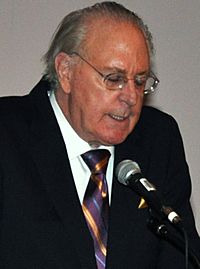 Winston Francis Groom Jr. (March 23, 1943 – September 17, 2020) was an American novelist and non-fiction writer. He was born in Washington, D.C. but raised near Mobile, Alabama.

He was best known for writing Forrest Gump, which was made into the popular 1994 movie Forrest Gump. He published a sequel, Gump and Co., in 1995.

He also wrote many non-fiction works such as about the American Civil War and World War I.

All content from Kiddle encyclopedia articles (including the article images and facts) can be freely used under Attribution-ShareAlike license, unless stated otherwise. Cite this article:
Winston Groom Facts for Kids. Kiddle Encyclopedia.