The Alabama Gulf Coast Zoo opened in June 1989 in Gulf Shores, Alabama, United States as Zooland Animal Park. It is operated by the Zoo Foundation, Inc., a 501(c)(3) non-profit organization, and relies on admissions, memberships and contributions for its funding. It was the basis of the Animal Planet show The Little Zoo That Could.

The zoo is several blocks north of the beach and is home to more than 600 animals including Barbary Lions, leopards, tigers, wolves, bears, monkeys, and macaws. It includes a petting zoo, reptile house, and aviary, as well as daily animal shows in the summer.

The Alabama Gulf Coast Zoo started as the private project of Joey Ward of Gulf Shores, and opened in June 1989 as Zooland Animal Park. The Ward family created the Zoo Foundation Inc. (a 501(c)(3) non-profit organization) in 1991 to operate the zoo, at the same time donating the 17 acres (6.9 ha) that make up the zoo today. An additional 13 acres (5.3 ha), which are still undeveloped, was donated by the Ward family and the Erie Meyer Foundation in 1994.

In July 1997, Hurricane Danny hit Gulf Shores. Then in 1998, Hurricane Georges hit, causing more flood damage. The zoo evacuated all of its animals in both cases, transporting them 15 miles (24 km) inland to higher ground and becoming the first zoo to have a full-scale evacuation during a hurricane. These expensive evacuations, and the repairs following the hurricanes, almost caused the zoo to close in 1999, but fund raising efforts were successful in raising enough money to keep it open. Hurricane Ivan in 2004 caused $500,000 in damage, forcing another evacuation and closing the zoo for 14 months. Several animals were not caught during this evacuation, and were lost. More evacuations resulted from Dennis and Katrina in 2005, but the zoo was able to reopen fairly quickly in October 2005.

The Little Zoo that Could

The flurry of activity around the zoo attracted media attention during Hurricane Ivan, and the zoo was approached about doing a series for Animal Planet. Shooting for the series started in 2005, and the first of thirteen episodes of The Little Zoo that Could aired in February 2006. The series focused on the zoo's efforts to reopen after being battered by three major hurricanes in 2004 and 2005: Hurricane Ivan, Hurricane Dennis, and Hurricane Katrina. A one-hour follow-up on the series aired in February 2007. The zoo announced that they are in the process of making a new show, suspected to air about the same time the new zoo opens. 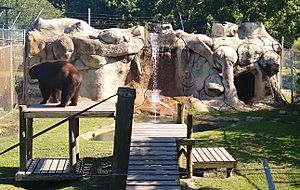 A bear in its enclosure

The local community and businesses have donated money, building supplies, and services in the past. On-going funding through sponsorships, grants, and endowments from major corporations did not exist before 1998, but are now being pursued to ensure the zoo’s future.

In 2009, the zoo unveiled a plan to move to new quarters that are farther inland and less susceptible to flooding. The 25 acres (10 ha) for the new zoo facilities were donated by Clyde Weir and his daughter Andrea Weir Franklin. The new facilities were scheduled to open in early 2013. The new zoo reopened on March 11, 2020.

All content from Kiddle encyclopedia articles (including the article images and facts) can be freely used under Attribution-ShareAlike license, unless stated otherwise. Cite this article:
Alabama Gulf Coast Zoo Facts for Kids. Kiddle Encyclopedia.