Ponce Inlet is a town in Volusia County, Florida, United States. The population was 3,032 at the 2010 census.

Several marinas are located in Ponce Inlet. The community is known for its strict land use regulations.

Completed in 1887, replacing the former lighthouse (built in 1835, it had collapsed into the inlet the following year), the Ponce de Leon Inlet Light Station was built when the area was known as Mosquito Inlet. After decades of restoration by the Ponce de Leon Inlet Lighthouse Preservation Association, it stands today as one of the best preserved light stations in the nation. 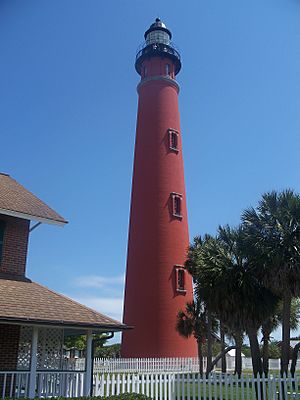 Visited by over 80,000 people each year, the Ponce de Leon Inlet Light Station was designated a National Historic Landmark in 1998. The lighthouse tower and museum are located 12 miles (19 km) south of Daytona Beach and are open to the public year-round. The Ponce Inlet Lighthouse is the tallest lighthouse in Florida and the second tallest lighthouse in the nation. Visitors who climb the 175-foot-tall (53 m) lighthouse tower are treated to a view of the Florida coastline and Halifax River from Daytona Beach to New Smyrna Beach. 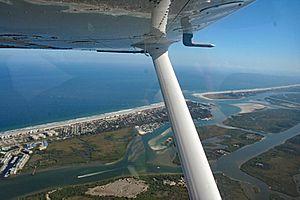 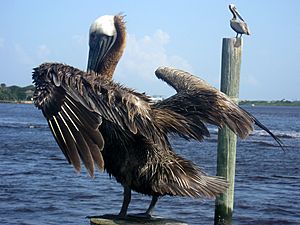 Brown pelicans at the harbor

All content from Kiddle encyclopedia articles (including the article images and facts) can be freely used under Attribution-ShareAlike license, unless stated otherwise. Cite this article:
Ponce Inlet, Florida Facts for Kids. Kiddle Encyclopedia.