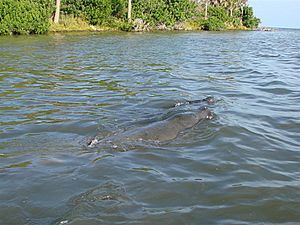 Mosquito Lagoon is a body of water located on the east coast of Florida in Brevard and Volusia counties. It is part of the Indian River Lagoon system and the Atlantic Intracoastal Waterway. It extends from the Ponce de Leon Inlet to a point north of Cape Canaveral, and connects to the Indian River via the Haulover Canal. The Mosquito Lagoon Aquatic Preserve includes 4,740 acres (1,920 ha) in the northern end of the lagoon. The preserve originally extended to the southern end of the lagoon, but close to two-thirds of the preserve in the central and southern lagoon were transferred to the Federal government, and is now part of the Canaveral National Seashore. The cities of New Smyrna Beach and Edgewater, the Merritt Island National Wildlife Refuge and the Kennedy Space Center adjoin the lagoon.

Mosquito Lagoon is an acclaimed spotted seatrout fishing habitat and a well-known destination for birdwatchers and nature tours.

The Nature Conservancy is coordinating an oyster restoration project, developed by the University of Central Florida. The goal is to restore about 40 acres (160,000 m2) of oyster reef habitat within the Canaveral National Seashore.

Winter, the bottlenose dolphin notable for her prosthetic tail (whose story was featured in the film Dolphin Tale and the sequel Dolphin Tale 2) was rescued from Mosquito Lagoon in December 2005.

In 2012, a brown tide bloom fouled the lagoon. The county has approval for funds to investigate this unusual bloom to see if future occurrences can be prevented.

All content from Kiddle encyclopedia articles (including the article images and facts) can be freely used under Attribution-ShareAlike license, unless stated otherwise. Cite this article:
Mosquito Lagoon Facts for Kids. Kiddle Encyclopedia.