The NWR contains over 1000 species of plants, 117 species of fish, 68 amphibians and reptiles, 330 birds, and 31 mammal species, of which 21 species are listed as endangered by the state of Florida or by the US federal government. Management of the NWR is provided through the Merritt Island NWR Complex, which provides hiking and driving trails for the public, subject to access restrictions from NASA. It is a 'gateway site' for the Great Florida Birding Trail. 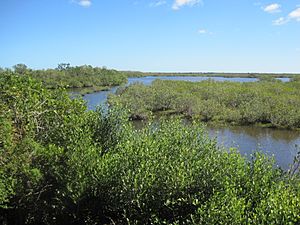 Merritt Island National Wildlife Refuge is located due east of Titusville on Merritt Island in Brevard County, Florida, and occupies 140,000 acres (570 km2), overlaid with the Kennedy Space Center. To the north, it borders on the Canaveral National Seashore; to the south it encompasses non-public portions of the Kennedy Space Center (with which it also shares some history), which in turn abuts Cape Canaveral Space Force Station. Mosquito Lagoon and the Indian River run through the refuge. Since public access to all these areas is controlled in various ways, the refuge is part of a very substantial area of relatively undisturbed wildlife habitat.

The land occupied by the NWR was acquired by NASA in the early 1960s for the development of the Space Center and its non-operational purposes. Until then, there had been little development in the area because of the high number of salt marsh mosquitoes. Public access is normally permitted, and several state highways run across the refuge. However, the public can be excluded if necessary for NASA's purposes, as is done in the days before a launch. 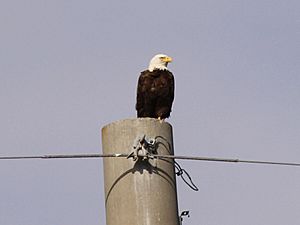 The refuge provides a range of habitats, from saltwater estuaries and freshwater impoundments and marshes, to dunes, hardwood hammocks, and scrub. It contains over 1000 species of plants, 117 species of fish, 68 amphibians and reptiles, 330 birds, and 31 mammal species. Of these species, 21 are listed as endangered either by the state of Florida or by the US federal government. The following are some of the more important species using the refuge; most of them nest there: 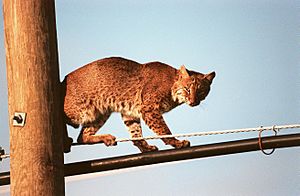 Subject to the needs of NASA, public access is relatively unrestricted, though it is only allowed during daylight hours; camping is only allowed for certain organized youth organizations.

The refuge provides hiking and driving trails for visitors, with opportunities for observing wildlife without causing disturbances; most of the species listed above can be seen by a casual visitor. An observation deck is provided near the drawbridge that carries State Road 3 over the Haulover Canal, in the northern part of the refuge, since manatees frequently congregate there. Boating is permitted on the waters around and within the refuge, and provides an opportunity for observing the wildlife. There are facilities for launching pleasure boats at several places. In addition the refuge includes, and gives access to Playalinda Beach on the outer barrier island. Fishing is generally permitted, and hunting for wildfowl is allowed on a strictly limited basis. There is a Visitor Center.

Roads in the refuge

All content from Kiddle encyclopedia articles (including the article images and facts) can be freely used under Attribution-ShareAlike license, unless stated otherwise. Cite this article:
Merritt Island National Wildlife Refuge Facts for Kids. Kiddle Encyclopedia.