Merritt Island is a census-designated place (CDP) in Brevard County, Florida, United States, located on the eastern Floridian coast, along the Atlantic Ocean. The population was 34,518 at the 2020 census. It is part of the Palm Bay – Melbourne – Titusville, Florida Metropolitan Statistical Area. The name "Merritt Island" also refers to the extent of the peninsula, misnamed an "island".

The central part of Merritt Island, previously known as Merritt City, is home to the majority of the population and includes the local high school, library, and shopping district.

Merritt Island owes its name to the king of Spain. The entire island was part of a land grant given by the king to a nobleman named Merritt.

In 1605, Spanish explorer Alvaro Mexia visited while on a diplomatic mission to the local tribes living in the Indian River area. He called the local tribe the Ulumay. Merritt Island is the prominent island on a color map he drew of the area, a copy of which is in the archives at the Library of Congress and the archives in Seville, Spain.

In 1837, Fort Ann was constructed on the east coast of Merritt Island, to protect the area against the Seminoles.

Merritt Island's recent history dates back to the mid-19th century and centers on the growth of citrus, stressing the cultivation of pineapples and oranges. The Indian River oranges and grapefruit come from this sandy area.

The island's population grew in the 1950s and 1960s as the Space Race began and nearby NASA expanded. Construction of a barge canal to the Intracoastal Waterway from the Atlantic Ocean (for power plant oil shipments) cut off the northern half of the island for many years. To this day, the northern portion of the island remains slightly less developed, with a few areas remaining as cattle pasture or citrus land. The small towns on the island vanished with the coming of the Space Age, and now only live on in the names of streets and historic churches. 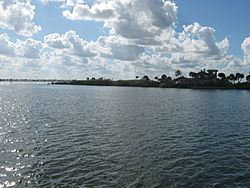 To the west, the island is connected by causeways to mainland Brevard County near Titusville and Cocoa on its northern end, and in Melbourne on its southern end.

There are about 12,000 feral pigs in North Merritt Island. Licensed trappers catch about 2,000 annually, which keeps the population even. The United States Fish and Wildlife Service would like to reduce the population.

There are light industrial fabrication centers on the Merritt Island Airport, and NASA-related industrial activities to support the Space Shuttle, which was retired in summer of 2011, and other rocket launches on Cape Canaveral Space Force Station.

Air Liquide operates a plant there.

Merritt Island has a redevelopment agency funded by the county.

SR 3, a 4-lane highway, connects the Kennedy Space Center for workers from the more densely populated central and southern sections of the island.

All content from Kiddle encyclopedia articles (including the article images and facts) can be freely used under Attribution-ShareAlike license, unless stated otherwise. Cite this article:
Merritt Island, Florida Facts for Kids. Kiddle Encyclopedia.