The Canaveral Barge Canal provides an east-to-west link between the Atlantic Ocean and Indian River Lagoon across northern Merritt Island, Florida, in two segments separated by the Banana River. It is located 15 miles south of Titusville, Florida. The canal is 12 feet deep and has entrances to other water systems including Sykes Creek and various marinas. The canal links Port Canaveral along the Atlantic Ocean to the Intracoastal Waterway running down the center of the Indian River Lagoon. The canal was constructed to allow the transport of crude oil by barge to the two power plants south of Titusville, Florida. 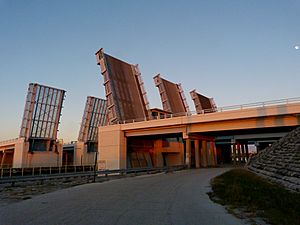 The Barge Canal Bridge is actually three adjacent bridges, each of which includes a bascule draw span.

All content from Kiddle encyclopedia articles (including the article images and facts) can be freely used under Attribution-ShareAlike license, unless stated otherwise. Cite this article:
Canaveral Barge Canal Facts for Kids. Kiddle Encyclopedia.