Angel City is a populated place on the Horti Point peninsula of Merritt Island, in Brevard County, Florida, United States. Angel City had a post office between 1927 and 1931. It is believed that the community was named for an early settler, John Angel. Hattie Worley, wife of Oscar Worley, the bridge tender, named Angel City after the first homesteader, Captain Angel from Rhode Island. 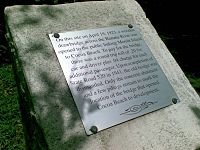 The Merritt Island Causeway linked Cocoa Beach to Angel City via a wooden toll bridge from 1922 to 1941. A plaque that marks this location states, "On this site on April 19, 1923, a wooden drawbridge across the Banana River was opened to the public linking Merritt Island to Cocoa Beach. To pay for the bridge, there was a round trip toll of .20 for car and driver plus .04 charge for each additional passenger. Upon completion of State Road 520 in 1941, the old bridge was dismantled. Only the concrete abutment and a few pilings remain to mark the location of the bridge that opened Cocoa Beach to development."

There are two uninhabited islands south of Buck Point named Brady and George's islands, which are accessible from Lotus and Georgiana. These islands are spoil islands. The southern of the two islands, commonly referred to as Bird Island, is popular with locals for boating, camping, and other such recreation. The island has earned this name, not by the overwhelming number of birds that populate it, but by its shape. From the air, the island resembles a pelican in mid-flight. The islands are a popular place for manatee and dolphin sightings. The islands are also home to pelican, great blue heron, seagull, southern stingray and rat snakes. White pelicans can be seen here in late winter, during their migratory journey. The Intracoastal Waterway passes by the islands to the north and east. To the west is Lotus, a part of Merritt Island more commonly known as Honeymoon Hill. To the south, Pineda Causeway can be seen. To the east is Patrick Air Force Base.

All content from Kiddle encyclopedia articles (including the article images and facts) can be freely used under Attribution-ShareAlike license, unless stated otherwise. Cite this article:
Angel City, Florida Facts for Kids. Kiddle Encyclopedia.